Adrian plays Wormold, the absolutist meat inspector patrolling a small town in Northern England, in which a pig – the eponymous Betty – is being illegally reared in advance of a banquet to celebrate the forthcoming Royal Wedding.
Media
Reviews
Adrian Scarborough, striding through the action in a gauleiter's fascist mac, is also wickedly funny as the obsessed meat-inspector. Michael Billington
The Guardian
There's potent support, too, from Adrian Scarborough as the sadistic stickler Wormold, garbed as if a reject from the Gestapo. Henry Hitchings
The Evening Standard
Adrian Scarborough as a vengeful food inspector that gives Javert from Les Mis a run for his money. Mark Shenton
The Stage 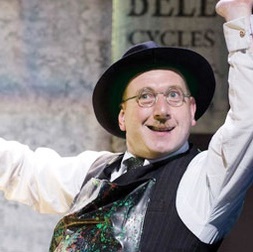