The Habit Of Art

Alan Bennett’s complex play-within-a-play tackles the friendship between W.H. Auden and Benjamin Britten. Adrian plays Donald, an actor playing Humphrey Carpenter – the radio journalist who would eventually become biographer for both Auden and Britten – and becomes paranoid that his role is little more than a literary device.

The Habit of Art was broadcast to cinemas worldwide on 22nd April 2010 as part of the National's NT Live scheme.

Frances de la Tour, as the stage manager, and Adrian Scarborough, as the biographer Humphrey Carpenter, give performances of comic perfection. 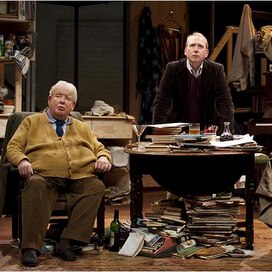