In the besieged city of Constantinople in 1453, in a public library in Lakeport, Idaho, in the present day, and on a spaceship bound for a vastly distant exoplanet decades from now, an ancient text provides solace, mystery, and the most profound human connection to five characters in peril. It is the story of Aethon, who longs to be turned into a bird so that he can fly to the paradise of Cloud Cuckoo Land, a better world.

Twelve-year-old Anna lives and works in the house of Kalaphates, where women toil all day embroidering the robes of priests. She is too restless to be good at embroidery. She learns to read from an old Greek tutor she encounters on her errands in the city. And in an abandoned priory, she finds a stash of old books, one of which is Aethon's story, which she reads to her sister as the walls of Constantinople are bombarded by Ottoman armies. Anna escapes, carrying only a small sack with bread, salt fish—and the book.

Outside the city walls, there is Omeir, a village boy, conscripted along with his beloved pair of oxen to fight in the Sultan's conquest. His oxen have died; he has deserted. His life and Anna’s will be joined.

In Lakeport, Idaho, in 2020, Seymour, a young activist determined to save the earth, sits in the public library with two homemade bombs in pressure cookers—another siege. Upstairs, eighty-five-year old Zeno, a retired snowplow driver, a former prisoner-of-war, and an amateur translator, rehearses five children in a play adaptation of Aethon's adventures.

On an interstellar ark called The Argos, Konstance is alone in a vault with a cot, sacks of Nourish powder, and access to all the information in the world—or so she is told. She, too, knows of Aethon, through her father, who has sequestered her to protect her. It is the story that sustains her.

Konstance, Anna, Omeir, the children in the library. Like Marie-Laure and Werner in All the Light We Cannot See, they are dreamers and misfits on the cusp of adulthood, who survive through their own resilience and resourcefulness, and through story. Their offering to us is hope.

Cloud Cuckoo Land is a hauntingly beautiful and redemptive novel about stewardship—of the book, of the Earth, of the human heart.

“Doerr returns with a deeply affecting epic. . . . [Cloud Cuckoo Land] is a marvel.”

Cloud Cuckoo Land is an impressive achievement and a joy to read. Serious novels are rarely this fun. In a world where nature and stories are more precious than ever, this fine book is an education, a comfort and an inspiration.

This is a dazzling epic of love, war and the joy of books – one for David Mitchell fans.

An ultimately hopeful and life-affirming novel about the essence of love, literature and art.

Doerr demonstrates a singular gift for bringing these complex, fully realized characters to empathetic life in this brilliantly imagined story.

Large hearted, wide in scope and joyous ... Cloud Cuckoo Land is a deep lungful of fresh air – and a gift of a novel.

This engagingly written, big-hearted book is a must-read – immersive popular fiction that breaks boundaries and makes you look at the world a bit differently.

A celebration of the way in which books enable us to connect with the past – and a warning about how fragile their survival has always been in a world in which those in power pursue war or harm the environment.

For all its structural and imaginative complexity, Cloud Cuckoo Land’s themes emerge clearly: how do we protect that which is most dear to us? What happens when utopian ideals clash with the juggernaut demands of progress? And how do we begin to find and to tell the stories that we fear have been lost?

Doerr’s first book since his Pulitzer Prize-winning All the Light We Cannot See and even grander in conception and delivery . . . . [Cloud Cuckoo Land] is a glorious golden mesh of stories that limns that the transformative power of literature and our need to both dream big and arrive back home in a world that will eventually flow on without us. Highly recommended.

Doerr builds a community of readers and nature lovers that transcends the boundaries of time and space ... This is just one of the many narrative miracles worked by the author as he brings a first-century story to its conclusion in 2146. As the pieces of this magical literary puzzle snap together, a flicker of hope is sparked for our benighted world.

A novel of epic stature and ambition.

Worth the seven-year wait... Will leave you in awe.

If you're looking for a superb novel, look no further.

[In Cloud Cuckoo Land, Anthony Doerr] takes his talents to the epic.

[Cloud Cuckoo Land] is as extreme a departure as they come, but so original you won't care. 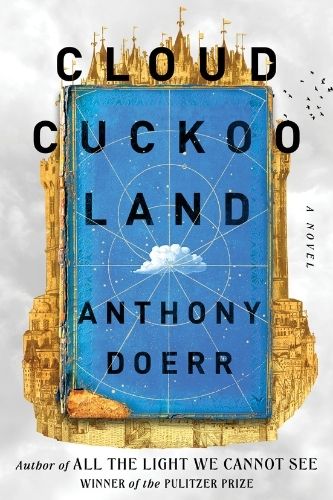