View PDF
tv
Role Dave
Director Alex Hardcastle
Production Company RDF Television
The Increasingly Poor Decisions of Todd Margaret is set around Todd Margaret (David Cross), an American who bluffs his way into an apparently great job opportunity, heading up the sales team in his employer's newly established London office. Todd has to sell a dozen container loads of a suspect Korean energy drink before his psychotic boss visits him. Todd knows nothing about British culture and nothing about sales.

Blake plays Dave, a local lad who stumbles into the position of Todd's accidental assistant, proving the most willfully unhelpful employee ever. Todd's life is further complicated when he lies continuously to cover his ignorance. Dave soon takes full advantage of Todd's situation and chaos ensues.
Media 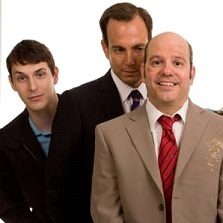