US & Canada → Doubleday (Ed. Jenny Jackson)
When Elizabeth Endicott arrives in Aleppo, Syria she has a diploma from Mount Holyoke, a crash course in nursing, and only the most basic grasp of the Armenian language. The year is 1915 and she has volunteered on behalf of the Boston-based Friends of Armenia to help deliver food and medical aid to refugees of the Armenian genocide. There Elizabeth becomes friendly with Armen, a young Armenian engineer who has already lost his wife and infant daughter. When Armen leaves Aleppo and travels south into Egypt to join the British army, he begins to write Elizabeth letters, and comes to realize that he has fallen in love with the wealthy, young American woman who is so different from the wife he lost.

Fast forward to the present day, where we meet Laura Petrosian, a novelist living in suburban New York. Although her grandparents' ornate Pelham home was affectionately nicknamed "The Ottoman Annex," Laura has never really given her Armenian heritage much thought. But when an old friend calls, claiming to have seen a newspaper photo of Laura's grandmother promoting an exhibit at a Boston museum, Laura embarks on a journey back through her family's history that reveals love, loss - and a wrenching secret that has been buried for generations.
Rights

Claire Nozieres manages the translation rights for The Sandcastle Girls

Armenian
World
Tsitsernak Publishing House
French
World
Editions Leduc.s
Hebrew
World
Matar Publishing House
Italian
World
Lit Edizioni
Lithuanian
World
Briedis
Macedonian
World
Antolog
Norwegian
World
Pantagruel Forlag AS
Polish
World
Sonia-Draga
Portuguese
Brazil
Editora Companhia Nacional
Russian
World
Vorak-Media
Turkish
World
Aras Publishing
Media
Reviews
This is a powerful and moving story based on real events seldom discussed. It will leave you reeling. Elizabeth Dickie
Booklist Full Review
This rendering of one of history's greatest (and least known) tragedies is an nuanced, sophisticated portrayal of what it means not only to endure, but to insist on hope.
Life Lift - The Oprah Blog Full Review
Dead-solid perfect. Bohjalian is a literary novelist unafraid to reference Proust's madeleine and expect readers to get it. But his books are also filled with artfully drawn characters and great, passionate storytelling. The Sandcastle Girls is all that, but different, more powerful. Curt Schleier
The Seattle Times
Bohjalian succeeds in depicting the horror, without sentimentalizing it... .He has fulfilled the duty of anyone seeking to document a genocide — he ensures that we don’t look away. Julie Wittes Schlack
The Boston Globe Full Review
Bohjalian deftly weaves the many threads of this story back and forth from past to present, from abuse to humanity, from devastation to redemption. His ability to add irony and wit makes the contrasting horrors even more intense. . .Staggering. . .[and] utterly riveting. Eugenia Zukerman
The Washington Post Full Review
Stirring. . .A deeply moving story of survival and enduring love. Carol Memmott
USA Today Full Review
It takes a talented novelist to combine fully ripened characters, an engrossing storyline, exquisite prose and set it against a horrific historical backdrop — in this case, the Armenian genocide — and completely enchant readers.
Associated Press Full Review
Bohjalian - the grandson of Armenian survivors - pours passion, pride, and sadness into his tale of ethnic destruction and endurance. Lisa Schwarzbaum
Entertainment Weekly Full Review
Great read. . .an affecting tale set at the time of a lesser-known holocaust, 1915's Armenian genocide.
People Magazine Full Review
Compelling...an eye-opening tale of longing and discovery...a bittersweet reflection on hope even in the darkest circumstances. Amy Driscoll
The Miami Herald Full Review
A romance so beautiful and believable it hurts. Nicholas Addison Thomas
The Fredericksburg Free Lance-Star Full Review
The Sandcastle Girls will remain ingrained in your consciousness. Wendy Plotkin
The Armenian Weekly Full Review
Bohjalian's writing style never rings a false note as it moves from present-day New York to the tragedy of World War I, his characters are as real as our own relatives. The well-researched history that forms the background informs, intrigues, and enchants - even as recollections of horror mount. Brandy Hilboldt
The Florida Times - Union Full Review
Remarkably supple...Bohjalian keeps his eyes on the personal, the little moments that illuminate broader social movements...Moment by moment, and passage by passage, the novel lights up a disturbing period of history. Margaret Quamme
The Columbus Dispatch Full Review
Sober, elegiac, and respectful. Margot Harrison
Seven Days Full Review
A moving multi-generational saga...riveting...a sober, elegiac, and touching novel. Usha Rao
Bookreporter.com Full Review
Bohjalian powerfully narrates an intricately nuanced romance with a complicated historical event at the forefront. With the centennial of the Armenian genocide fast approaching, this is not to be missed. Simply astounding. Julie Kane
Library Journal Full Review
Bohjalian's powerful novel...depicts the Armenian genocide and one contemporary novelist's quest to uncover her heritage...His storytelling makes this a beautiful, frightening, and unforgettable read.
Publishers Weekly Full Review
The Sandcastle Girls is deft, layered, eye-opening, and riveting. I was deeply moved. Wally Lamb, author of The Hour I First Believed
Full Review

A gruesome, unforgettable exposition of the still too-little-known facts of the Armenian genocide and its multigenerational consequences.


Kirkus Starred Review Full Review
Chris Bohjalian is at his very finest in this searing story of love and war. With breathtaking richness and accuracy, he fully delivers us to Syria in 1915, with all its difficult history. I was mesmerized from page one. Bravo! Paula McLain, author of The Paris Wife 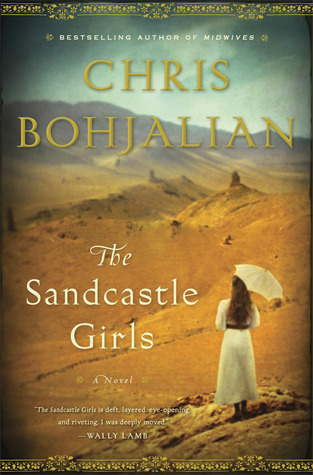