Set amongst the patients and young medical team at a psychiatric hospital in Glasgow Pyschos was a gripping and challenging drama series.

Its uncompromising portrait of the system, the patients and the doctors was critically acclaimed and for the first time gave a real insight into life in mental hospital for staff and inmates.

The drama followed the private and professional lives of the staff and the effects, or lack of, they had on their patients and visa versa.

Psychos was David's first ever drama script and its commission marked the start of Channel 4's policy of making series - and was also the first ever fiction commission for Kudos Productions.

Media
Reviews
'a distinctive blend of the droll and the disturbing... Outstanding.'
The Sunday Times
'a delightful script'
Time Out 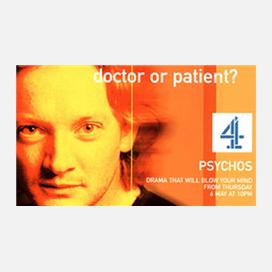