A Long Night in Paris

Victim of his own practical joke, an Israeli marketing wizard is kidnapped from the Charles de Gaulle Airport in Paris by a terrifying Chinese commando and their blonde bait, a few minutes upon landing from the El-Al 319 flight.

Within hours, a second Israeli traveler from the same flight is kidnapped from his hotel room in Paris, and then the dominoes really start to fall. What seemed to be a straightforward police case rapidly becomes a journey to the heart of a dark conspiracy inside Israel’s most secretive intelligence service, Unit 8200.

Colonel Zeev Abadi, just nominated to lead the special branch of Unit 8200, is on the scene by sheer coincidence. If you believe in coincidences, that is. The powerful enemies of Abadi inside Israel’s military intelligence do not, and neither does Commissaire Difficile, the head of the Police Judiciaire in Paris.

Abadi’s deputy, the dazzling and hot headed Lieutenant Orianna Talmor, is his reluctant ally as they embark on a frantic hunt that will take them from the historic swimming pool of Hotel Molitor to a huge underground carpark ruled by ruthless drug-lords of Parisian suburbs, and from the hidden corridors of power in Jerusalem to the mysterious playgrounds of a cruel Chinese cartel in Macao.

Their breathless journey will last 24 hours, leaving 12 people dead and taking them to the heart of a dark conspiracy more chilling, ingenious and treacherous than anyone could have guessed.

Dov Alfon writes with flair and confidence. His insider knowledge brings an added layer of verisimilitude. The bitter competition between the multiple wings of the Israeli intelligence complex and a further set of rivals in the military are vividly drawn, as is the snake pit of high-level Israeli politics.

Readers who relish technical detail will appreciate the wealth of information about the Israeli intelligence services, cheek-by-jowl with political shenanigans, Chinese gangsters and mysterious blonds.

This is a deeply enjoyable espionage thriller with plenty of juicy details about modern spycraft.

This is a genuinely thrilling espionage novel from a former Israeli intelligence officer. It takes place during one very long night in Paris, and features a wonderful cast of Chinese gangsters, French detectives, Russian models and charismatic, backstabbing Israeli spies, all locked into a brilliantly choreographed danse macabre.

With plenty of technical detail to intrigue the reader as much as the taut plot and adrenaline-fuelled intensity make this a book you’ll want to devour… in a long night. 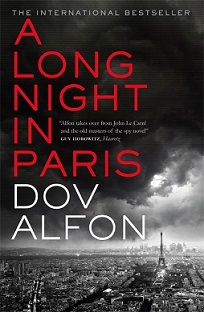