World → Little, Brown & Company
The hotly anticipated wedding of Iris Devonshire, ravishing teenage daughter of celebrity couple Mia and Leo, is to be held in the gardens of their grand Palladian pile alongside the Thames. But Mia and Leo worry that she's rushing into the marriage. Just ask their best friends since college, Simon and Laney de Montmorency, whose relationship is on the rocks again - and they've already married each other twice.

On the big day, Iris's playboy fiancé Dougie Everett is flying on a chemically assisted high, and he's not the only one floating on a collision course. As Iris rides up the aisle on a dressage stallion, a hot air balloon appears over the woods, heading straight for the ceremony. Its arrival is about to transform the lives and loves of some of the wedding guests for ever.

A feisty, witty summer comedy set against the beautiful backdrops of the Chilterns, Spain, Africa and LA.
Rights

Katie McGowan manages the translation rights for The Summer Wedding

Full of witty quips and one-liners, The Summer Wedding has everything from pedigree stallions to WAGS to film stars, with some steamy sex and romace thrown in too – all of which mean fun and frolics... Set up the sun lounger and get stuck in! 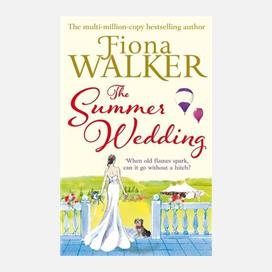