The People in the Trees

In 1950, a young doctor called Norton Perina signs on with the anthropologist Paul Tallent for an expedition to the remote Micronesian island of Ivu'ivu in search of a rumoured lost tribe. They succeed, finding not only that tribe but also a group of forest dwellers they dub 'The Dreamers', who turn out to be fantastically long-lived but progressively more senile. Perina suspects the source of their longevity is a hard-to-find turtle; unable to resist the possibility of eternal life, he kills one and smuggles some meat back to the States. He scientifically proves his thesis, earning worldwide fame and the Nobel Prize, but he soon discovers that its miraculous property comes at a terrible price...

Power and its abuses are at the heart of Yanagihara’s beautifully written debut…. Both striking and highly satisfying. Yanagihara’s ambitious debut is one to be lauded.

A debut that doubles as a gripping travelogue and triples as a novel of dangerous ideas.

Feels like a National Geographic story by way of Conrad’s Heart of Darkness…. The world Yanagihara conjures up, full of ‘dark pockets of mystery’, is magical. 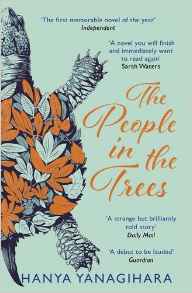