Jamie plays Mister Jonny, a cerebal palsy-suffering relative of the Gotobeds, in the production.
Media
Reviews
Mr Beddard...delivers the goods with effortless aplomb. Quentin Letts
Daily Mail
Jamie Beddard as Johnny Gotobed underlines Bawden's extraordinarily enlightened messsage, as potent now as when she wrote it. Michael Coveney
whatsonstage.com
Best of all is James Beddard as Mr Johnny, the first time, surely, a genuinely disabled actor has made such a marvellous meal of a disabled role in the West End. Michael Coveney
whatsonstage.com 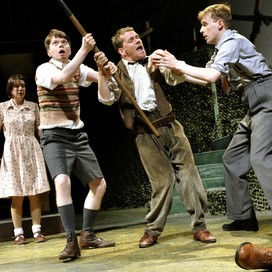