Phillipa and Will Are Now In a Relationship

Inspired by the true story of his friends' Facebook walls, Jon Brittain has created Phillipa and Will (or Willipa): a mutually obsessed, over-sharing Romeo and Juliet for the Internet age. A filthy, funny, bittersweet romance, told entirely through a Facebook wall-to-wall.

Philippa and Will Are Now in a Relationship premiered at the Brighton Fringe Festival in May 2011, had a sell-out run at the 2011 Edinburgh Fringe Festival and then transferred to Theatre 503 Autumn 2011.

Media
Reviews
Jonathan Brittain's script pushes all the right buttons... a hugely likeable piece of comic theatre Richard O'Brien
Broadway Baby Full Review
the joy of this show is in its simplicity
Brighton Argus
It’s a heart rending, true and funny show which deserves a much bigger audience. Go and see it if you can. ****
Fringe Review
It was totally cringeworthy, but in a good way. LOL! Like! ****
Latest 7, Brighton 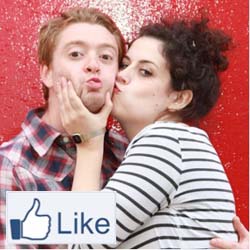