The Comedy of Errors

View PDF
theatre
Role Dromio of Syracuse
Director Nancy Meckler
RSC
The Comedy of Errors is Nancy Meckler’s 2005 production of Shakespeare’s Comedy.
It tells the story of Egeon, a merchant of Syracuse, who is imprisoned and given 24 hours to pay a large fine or face execution. Elsewhere in the city, his long lost twin sons Antipholus of Ephesus and Antipholus of Syracuse face a series of increasingly farcical obstacles as they are repeatedly mistaken for one another. 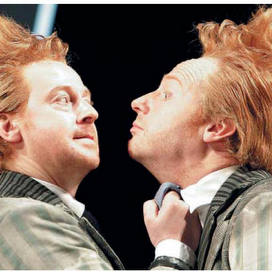