There Will Come a Darkness

The Age of Darkness approaches. Five lives stand in its way. Who will stop it . . . or unleash it?

For generations, the Seven Prophets guided humanity. Using their visions of the future, they ended wars and united nations—until the day, one hundred years ago, when the Prophets disappeared.

All they left behind was one final, secret prophecy, foretelling an Age of Darkness and the birth of a new Prophet who could be the world’s salvation . . . or the cause of its destruction. With chaos on the horizon, five souls are set on a collision course:

A prince exiled from his kingdom.

A ruthless killer known as the Pale Hand.

A once-faithful leader torn between his duty and his heart.

A reckless gambler with the power to find anything or anyone.

And a dying girl on the verge of giving up.

One of them—or all of them—could break the world. Will they be savior or destroyer?

Leigh Bardugo's Six of Crows meets Kristin Cashore's Graceling with a dash of Winter is Coming, in this showstopping debut YA fantasy.

The audio rights are handled by Henry Holt Books for Young Readers.

A sweeping, ambitious fantasy that pulled me into a world of corruption, dark prophecy, and ultimately, hope. The breathlessly paced story and well-rendered ensemble cast gripped me until the very last pages.

Julie C. Dao
Author of Forest of a Thousand Lanterns

Even in a world filled with graces and prophets, the real magic of There Will Come a Darkness is in how Pool has crafted her heroes—messy, flawed, and so beguilingly human. I dare you not to fall madly in love with all of them.

There Will Come a Darkness is a can’t miss debut from an exciting new talent. I defy you not to lose yourself in this vast, luscious fantasy.

Katy Rose Pool combines lovable characters, a gorgeously tangible world, and an intricate puzzle-box plot to create a story that will pull you inexorably toward the explosive end.

A brilliantly woven story with compelling characters, surprising twists and a prophecy driven not by distant fate but by hard, human choices. There Will Come a Darkness was a pleasure to read and left me eager for more!

This epic fantasy novel revels in rich worldbuilding... A well-crafted, surprising, and gripping start to a new trilogy.

Fans of huge, sprawling fantasies and prophecies about apocalypses won’t be disappointed.

The Bulletin of the Center for Children’s Books

A secret prophecy hints at one soul who might be able to save the world from eternal darkness, but it’s not clear who will it be: the exiled prince, the gambler, the dying girl, the killer, or a former leader who’s lost his way.

Could this be YA’s next big fantasy? All indications point to yes. Author Katy Rose Pool was just 24 years old when her epic novel, set to kick off a trilogy, sold in the seven figures last year. Expect everything from ancient mythologies to juicy sibling tensions to plenty of sword fights.

Five teens stand in the way of the Age of Darkness and destruction. A prince exiled from his kingdom. A ruthless killer known as the Pale Hand. A once-faithful leader torn between his duty and his heart. A reckless gambler with the power to find anything or anyone. A dying girl on the verge of giving up. The prophecy has foretold them. One―or all of them―could break the world or save it. We can’t wait to binge read this debut epic fantasy!

Barnes and Noble
20 Biggest YA debuts of the fall

One hundred years ago, the Prophets disappeared, and they took with them all the foreknowledge of what was to come. They then left behind just one grim prophecy: that a new Prophet would rise and could either save the world or bring it to ruin. Amidst the chaos the world has become, five different people — an exiled prince, a leader, a murderer, a gambler, and a girl with a death sentence — could fulfill the prophecy and turn everything to dust.

If you've been waiting for the next big fantasy series, it has arrived...

There Will Come a Darkness is set apart by its immersive worldbuilding and compelling narrators. Pool raises difficult questions of fate, choice and morality as her characters are torn between their conflicting goals and the greater good, giving this epic tale human stakes.

This inventive, gripping novel’s narrative drive remains strong thanks to its high stakes, abundant action, and realistic romances both gay and straight.

Juggling five main characters is no mean feat, but Katy Rose Pool somehow pulls it off in this taught, intriguing trilogy opener.

Pool has crafted an intricate story line that includes many different points of view; chapters alternate characters’ perspectives [...] readers will be eager for a sequel.

In one of the most stunning debuts of the year, Katy Rose Pool transports readers into this fantastical new world 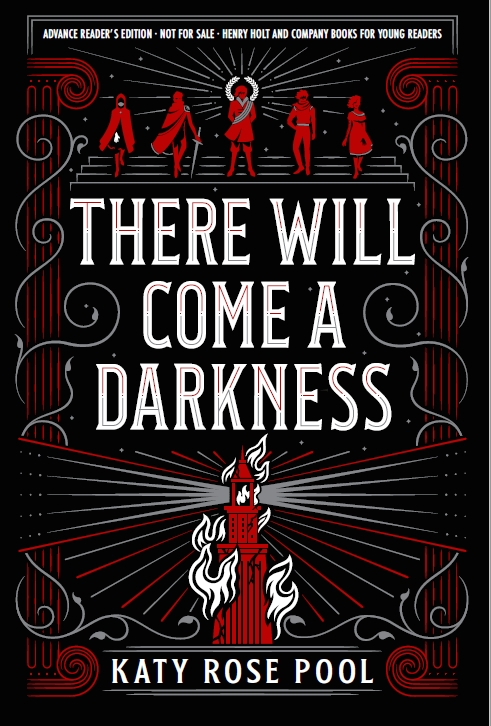