The Thick Of It is a satirical BBC comedy following the behind the scenes machinations by a New Labour-esque British Government desperate to ‘spin’ the truth in its favour in order to stay in power. 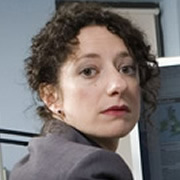