Producer Chris Carey & James Dean Writer Chris Bran & Justin Chubb Starring
Production Company The Welded Tandem Picture Company
Broadcaster SKY Atlantic
See the Full Version of this Work
This Is Jinsy started life as a pilot on BBC Three, but has now been turned into an eight part series by Sky, with Matt Lipsey as director.

The series follows Arbiter Maven and Operative Sporall as they keep a close eye on the 791 residents of Jinsy from the Great Tower in the parish of Veen. Life on the island is rather Orwellian: each colourful member of the community is monitored by a surveillance system of tessellators, from local folk dribbler Melody Lane to weather monk Tracee Henge.

The tessellators include video cameras for surveillance, but also little screens to allow the residents to watch important island events, such as the tri-annual island cow wash (live from Glotters field). Additionally, they include a handy slot for paying fines, and a sphincter nozzle for product and pill downloads.

Arbiter Maven (the 17th Arbiter and 'Wearer of the Hat') is assisted by Operative Sporall (nice hair and 'Wearer of the Beige Suit') and from the Great Tower they observe video feeds from the tessellators and keep a watchful eye on the residents.
Media
Reviews
Words can't adequately describe this gloriously eccentric new British sitcom - you'll just have to see it for yourself... this has got cult classic written all over it Jane Simon
The Daily Mirror
This Is Jinsy pulled off the trick of turning its multifarious influences into something that felt fresh and new. Keith Watson
Metro
It is brilliantly done... it offers a slice of oddball humour quite unlike anything else to be found. Alice-Azania Jarvis
The Independent
This is Jinsy is undoubtedly the strangest comedy to emerge in recent years. This has all the hallmarks of a cult classic. Sarah Cox
onthebox.com
With friends in high places – heck, even Jennifer Saunders is involved – we’ll be hearing a lot more of this deliciously off-kilter comedy.
Holy Moly
This Is Jinsy, a sitcom with funny-shaped knobs on, is the strangest and freshest new comedy of 2011. Jack Seale
Radio Times 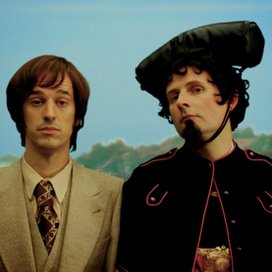