Switching seamlessly between theatre and film using a combination of Coward's original stage play Still Life and the screenplay of Brief Encounter, Emma Rice, Kneehigh's Artistic Director, takes you back to a bygone age of romance and the silver screen from the moment the commissionaire opens the doors.

Milo Twomey played the leading role of Alec in the original UK production and also the US tour.
Media
Reviews
Hannah Yelland and Milo Twomey are magnificent and moving as Laura and Alec - grabbing these legendary characters and making them very much their own. Sid Langley
Birmingham Post 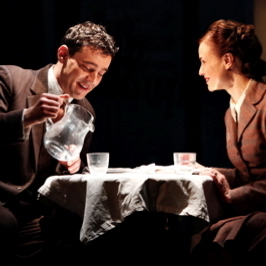