World → Constable & Robinson (Ed. James Gurbutt)
When Elizabeth Price writes to a P.O. Box to engage private detective Roland ‘Orlando’ Gibbons to find out the truth about her husband’s suspected affair, she unwittingly sets off a chain of correspondence that reunites four couples who once knew each other but who are now estranged – despite living just a few suburban streets away from each other, or indeed despite still being married to each other.

An uproarious and poignant portrait of four marriages and how little we know those we think we know best, the story is told in a series of letters – from love notes to condolence messages (the latter one arriving some years late) – in which each protagonist is far more self-revealing than they would ever be in person.

It’s a brilliant take on what you might call the heartfelt literary comic novel, by the author of The Wimbledon Poisoner (and more latterly the Emmy- and Golden Globe-winning writer of Elizabeth I starring Helen Mirren).
Rights

Melissa Pimentel manages the translation rights for Unfaithfully Yours

‘Cruel, clever, hilarious and stylish … exhilarating in its comedy … a wonderfully entertaining novel which cannot fail to delight.’ 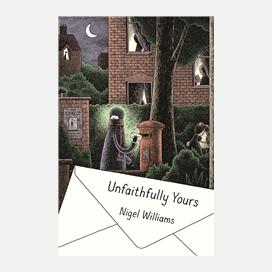