Butler to the World

AS SEEN ON LED BY DONKEYS

How did Britain become the servant of the world's most powerful and corrupt men?

The Suez Crisis of 1956 was Britain's twentieth-century nadir, the moment when the once superpower was bullied into retreat. In the immortal words of former US Secretary of State Dean Acheson, 'Britain has lost an empire and not yet found a role.' But the funny thing was, Britain had already found a role. It even had the costume. The leaders of the world just hadn't noticed it yet.

Butler to the World reveals how the UK took up its position at the elbow of the worst people on Earth: the oligarchs, kleptocrats and gangsters. We pride ourselves on values of fair play and the rule of law, but few countries do more to frustrate global anti-corruption efforts. We are now a nation of Jeeveses, snobbish enablers for rich halfwits of considerably less charm than Bertie Wooster. It doesn't have to be that way.

One can sense the urgency and dismay in Bullough’s writing

This is the defining of our time

Could a book ever be more timely? . . . Highly readable

Terrific . . . pulled by a current of Tory indolence, Britain flounders in a sea of dirty money

A savage analysis of Britain's soul. As essential as Orwell at his best.

Highly readable... deserve[s] praise for going beyond moralising and pointing out how an industry geared to enabling the corrupt is not just unsavoury but can hurt a country's real economic prospects

An urgent account of Britain's history of welcoming corrupt capital ... Mr Bullough argues compellingly that though more anti-corruption funds and tougher enforcement are welcome, what is really needed is a change of philosophy: for principles to take precedence over the profits of a few

I read Moneyland slack-jawed at the blatant techniques ... used to launder money ... Bullough is cynical, and his findings make depressing reading... But he's right that the whole system is built to facilitate the crooks, and takes the rest of us for mugs

It is hard to imagine a more timely book ... Butler to the World is both a brilliant and depressing blast at decades of malign financial cosiness and the politicians who let it happen ... It takes guts to write and publish a book like this ... Bullough doesn't sit back and drily condemn all this financial skulduggery, he goes to meet the people who helped create the conditions that allowed it to happen

Butler to the World's main message - that Britain needs to clean up its act not just for its own good but for that of the world - rings all the louder because of current geopolitics ... it's a damning judgement, but one that Bullough ... is well-positioned to give

Jaw-dropping ... Bullough has a gift for making complex financial information comprehensible and strives to leaven this depressing story with jokes and deft character sketches ... timely

Bullough does a great line in deft sketches of personalities

The term 'timely' is used all too often in the media, but there really isn't a more timely book than Oliver Bullough's Butler to the World ... If you like books where you learn a lot - which we certainly do - then we commend it to you wholeheartedly.

Butler to the World helpfully freeze-frames ... an embarrassing state of affairs, with few signs of Britain's unprincipled eagerness diminishing ... why is the county's politico-financial elite, so convinced of Britain's brand values of honesty and trustworthiness, so open to helping find comfortable homes for the tainted wealth of oligarch, gangster and kleptocrat?

A horribly brilliant account of just how much historical integrity Britain has sacrificed at the altar of dirty money. Bullough is a compelling and expert guide to the newly-dug sewers flowing through the heart of our political, legal and financial establishment 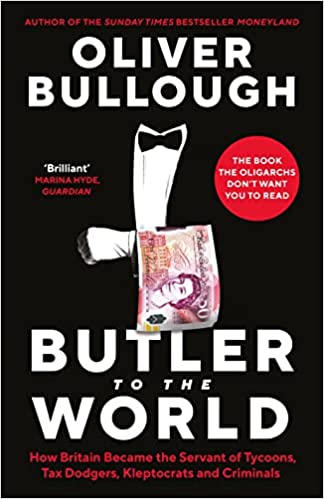