Let Our Fame Be Great: Journeys among the defiant people of the Caucasus

The Caucasus mountains are a land of jagged peaks and rugged people, who for over 200 years have rebelled against Russia's attempts to add them to its empire. Oliver Bullough's extraordinary debut tells their story for the first time. Travelling from remote village to refugee camp, rocky mountain gorge to forgotten massacre site, he discovers exiles, fighters, lost sects, defiant survivors - and an unbreakable spirit.

This wonderful, moving book flashes backwards and forwards over a terrain almost impossible to survey, and manages the feat.

Oliver Bullough's book is a painstaking, sensitively reported effort to knit together their [the people of the Caucasus] lost history.

A book that effortlessly mixes on-the-spot reportage and a wide-ranging history . . . Let its fame be great

Lively and impassioned ... a tragically neglected corner of our world

Bullough brings us exciting news, presented as short, gripping stories that ... The history of their resistance and resilience has been largely unknown for two centuries. Now their stories are sung by a champion and will resound beyond their boundaries

An impressive debut ... heartfelt and compelling ... With this impassioned volume he has struck a blow for the glory of the Caucasus and helped to give voice to the voiceless

Let Our Fame Be Great is a treat ... Finely bound, with excellent maps, Bullough draws you irresistibly into his narrative, fusing reportage, history and travelogue in colourful, absorbing prose ... The book is a pleasure, and most importantly, it is critical to understanding modern Russia with its worrying collective amnesia

Fascinating and ground-breaking ... Bullough has got plenty of dust, snow and mud on his boots from his travels recording the forgotten tragedies of the North Caucasus ... In the process he [has] unearthed many priceless nuggets of historic truth 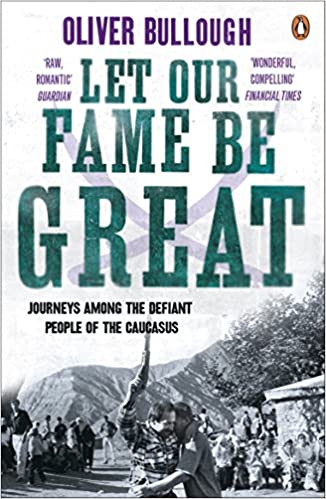