A Bitter Truth: Avant-Garde Art and The Great War

"It is unspeakable, godless, hopeless. I am no longer an artist interested and curious. I am a messenger who will bring back word from the men who are fighting to those who want the war to go on forever. Feeble, inarticulate, will be my message, but it will have a bitter truth." - Paul Nash, 1918, at Passchendaele.

The trauma of the First World War had an immensely powerful effect on the painters, sculptors, and printmakers who participated in it. They produced an extraordinary range of striking images that conveyed the immediacy and horror of their experiences and feelings. This arresting book is the first to bring together and examine the full international array of images spawned by the Great War. Richard Cork shows how avant-garde artists from Europe, Russia, and the United States challenged the recruiting posters and other propagandist views of the struggle by producing art that reflected the degradation of the trenches. The conflict was anticipated before hostilities began by the visionary and apocalyptic work of painters such as Meidner and Kandinsky. Chagall, Nevinson, Hartley, Beckmann, Kirchner, and other artists were quick to define war's essential tragedy with objective, expressionist, or allegorical art that alluded to their own wartime experiences. The harshest images of war were made in the latter stages or after the Armistice, when artists such as Dix had time to consider their participation in the war. Ironically, the post-war years also witnessed the redemptive work of Spencer and Brancusi, who after the Armistice produced monumental affirmations of brotherhood, fortitude, and love.

This lavishly illustrated book accompanied a major exhibition of art from World War I at the Altes Museum in Berlin and at the Barbican Art Gallery in London in 1994. 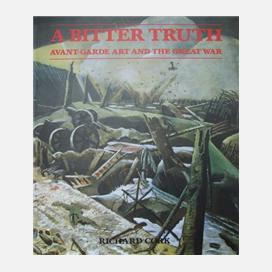