SHORTLISTED FOR THE DESMOND ELLIOTT PRIZE
SHORTLISTED FOR THE AUTHORS' CLUB BEST FIRST NOVEL AWARD
A badly-injured motorcycle rider regains consciousness in the middle of the desert. He has suffered amnesia and can remember little of his life. Waiting for the inevitable end, he is robbed of his possessions; first, a troop of German soldiers find him and strip him of his dogtags and pay book, and when they leave a tribe of Senussi swarm around him and take whatever is left. All that remains by his side is a bag of letters.

After a night spent wishing for death, the rider is rescued by a small group of deserters. Bound together by fear of capture, they have formed a makeshift troop of their own, governed precariously by their own laws. At first they welcome the rider into the fold, but as time goes by and his memory doesn’t return, they grow suspicious. The rider turns to the bag of letters. Does one of them hold a clue to his former identity?
The Letter Bearer is a hypnotic journey through the horrors of war and an exploration of the true meaning of identity, courage and honour. What does it mean to know who you are? Does hardship excuse wrongdoing? And is there such a thing as a noble lie?
Rights

Claire Nozieres manages the translation rights for The Letter Bearer

Allison's debut novel takes its readers into the dark heart of war  . . . delivered with an unerring eye for detail. The literature of war is as old as literature itself, and this harrowing novel is a fine addition to it.

Robert Allison’s finely crafted debut is about courage and cowardice, and how the will to self-preserve may override and be overridden by nobler instincts . . . Beautifully conveys the loneliness of the soldiers’ predicament.

Gripping . . . A beautifully written investigation into alienation, guilt and the will to survive. The desert is a character itself, brilliantly alive and vividly depicted . . . This is a gripping exploration of one man's travails – and through him, those of millions other men trapped in the terrible mechanism of war.

Robert Allison’s The Letter Bearer takes us to a pitiless desert in which man’s nature finds no ordered society to disguise it. Described by my fellow judge as “Lord of the Flies, with grown-ups”, it deserves the same acclaim and close attention as Golding’s novel (which, incidentally, was his debut). Robert Allison’s premise is wholly original, his dialogue faithful to period, his emotional range tight, his prose consistently elegant. He writes superbly about men’s journey through harsh country that renders complex moral questions down to brutal and necessary decision points. If ever there is a book that deserves to go straight into the teaching canon, this is it.

[Its] balancing of psychological depth and authentic geographical detail is lovely and perfectly pitched. Allison’s astonishing debut is one of the more original and quite unforgettable takes on the war.

Allison’s tale has an almost hypnotic inevitability that unfolds as the rider shifts his viewpoint from unknown past to an unknowable future in which “I shall become everything expected of me.” Elegantly and exactingly written.

Allison’s poetic first novel... breathes fresh life into World War II fiction... The narrative is filled with harrowing confrontations and memorable scenes illustrating the follies of war, all punctuated by heart-shattering letters between soldiers and their loved ones back home. This novel is ultimately a stunning combination of muscular action and penetrating self-examination. 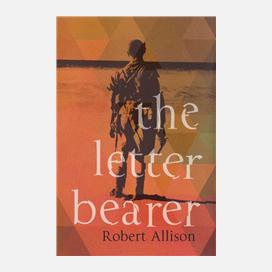