View PDF
In competition at Cannes for a Palm D'or
film

This short film about sibling rivalry was written, directed and co-produced by Sophie with Todd Barnes and Dorothy Williams. My Blind Brother was in competition at Cannes in 2003, it was also selected for the SXSW, Melbourne, Sao Paulo and London film festivals. The film won the top screenwriting award and the King Award at the NYU First Run Film Festival and won Best Student Short at the Nashville Film Festival.

When your brother is a handsome athlete it's hard to get noticed, especially when he's blind. When charismatic, blind Robbie does a sponsored swim he is reliant on his brother Bill to guide him across the bay, but while in deep water the tensions between them boil over. My Blind Brother is a dark comedy about wanting to be special. 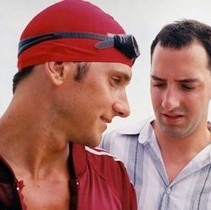