I know what you’re thinking, that it sounds like something a stalker would do, but I was just passing. No, honestly. I was in the area having a wander around Regent’s Park…I thought it couldn’t hurt to pop along to your road, just to remind myself where it was.

For five years Sally and Clive were lost in a passionate affair. Now he has dumped her, to devote himself to his wife and family, and Sally is left in freefall.

It starts with a casual stroll past his house, then popping into the brasserie where his son works, then Sally starts following Clive’s wife and daughter on Facebook. But that’s all right, isn’t it? I mean, they are perfectly normal things to do. Aren’t they?

Not since Fatal Attraction has the fallout from an illicit affair been exposed in such a sharp, darkly funny and disturbing way: The Mistress’s Revenge is a truly exciting fiction debut for reading and sharing with all your friends. After all, who doesn’t know a normal, perfectly sane woman who went a little crazy with a broken heart…?
Rights

Melissa Pimentel manages the translation rights for The Mistress's Revenge 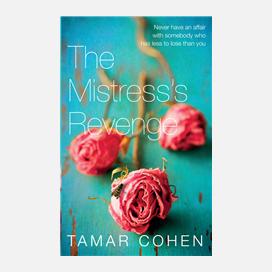