View PDF
theatre
Role Edmund
Director David Farr
RSC
King Lear is David Farr’s 2010 production of Shakespeare’s tragedy. It follows the elderly King of England as he decides to retire from power and divide his kingdom between his three daughters, on the condition that they prove their love for him. When the daughters betray their father and attempt to usurp the throne from under him, the old King is slowly driven mad.

Tunji played Edmond, the illegitimate son of the Duke of Gloucester, in the production.
Media 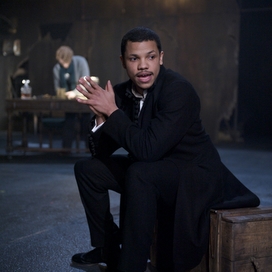