The Winter’s Tale is David Farr’s 2009 production of Shakespeare’s romance. It tells the story of Polixenes, King of Bohemia and Leontes, King of Sicilia, whose great friendship quickly sours when Leontes begins to suspect Polixenes of cuckolding him.

Tunji played Florizel, Polixenes' only son and heir, in the production. 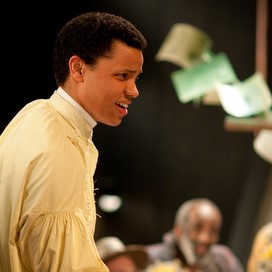