A son receives an inheritance from his father and tries to dispose of it before it destroys him.

Inherited Disorders tells this elemental story in 117 variations: 117 well-meaning fathers and the 117 sons they inadvertently annihilate through their fatherly affections. A Czech pianist amputates his fingers one by one to thwart his father, who will not stop composing concertos for him. A 19th century Italian nobleman wills his ill-conceived flying contraption – incapable of actual flight – to his newborn son. In West Hollywood, an aspiring screenwriter must contend with the judgemental visage of his father, a respected public intellectual whose frozen head, clearly disappointed in him, he keeps in his freezer. Each of these surreal tales and parables aims to entertain on its own, but taken together, they are also thought experiments and investigations devised by a single son desperate to understand his ambivalent feelings toward his own beloved father: an inquiry in stories.

Steeped equally in the dark absurdism of Kafka and the precise quality of Lydia Davis, Inherited Disorders brings a contemporary sensibility to one of the oldest literary forms – as well as a warped comedic world view entirely its own.

The audio rights are handled by Regan Arts.

Adam Ehrlich Sachs's debut marks the arrival of a major humorist. If Kafka and Louis CK were to join forces, they might produce something like Inherited Disorders: absurd, wise, and extremely funny.

Inherited Disorders makes a certain kind of anxiety so comically debilitating that the full extent of its uselessness is revealed. Beneath its surface, lurks the question: what might we be capable of accomplishing if we weren’t so worried about what we should be doing?

Sachs, who is thirty and has written for Hollywood, is a newcomer to fiction, but it’s hard to imagine a more assured debut: Each of its 117 father-and-son parables is saturated with the sort of sadness, cruelty, and humor you might find in Thomas Bernhard, one of Sachs’s confessed European-modernist influences.

Sachs has a finely tuned sense of humor and an economical writing style that gives each story plenty of punch... He’s made sure that Inherited Disorders is crammed full of smart turns of phrase, clever twists of logic, and plenty of laughs.

With his humor, wit, and imagination, Sachs proves himself a perceptive observer of human nature and a distinctly promising talent.

Endlessly sharp and engaging from start to finish. There is something almost rhythmically musical or mathematical about the form, like Monet’s water lilies...Unique, compulsively readable, and entirely modern.

Ingenious, structurally elegant inheritance puzzles...Much of the book’s comedy is in Sachs’s way of treating these fraught relationships as if they were systems with rule-governed outcomes to be modeled and graphed.

Filial ties, in all their tangled perversity, are the subject of Mr. Sachs’s debut. His brief comic sketches—each a darkly glittering gem of compressed neuroses—illustrate the astounding range of resentments and misunderstandings that exist between fathers and sons.

Adam Ehrlich Sachs’s debut collection, Inherited Disorders, looks at the nature of relationships between fathers and sons in over a hundred wonderfully absurd vignettes. Hilarious and quirky yet poignant, Inherited Disorders is one of the most original — and entertaining — books of the season. 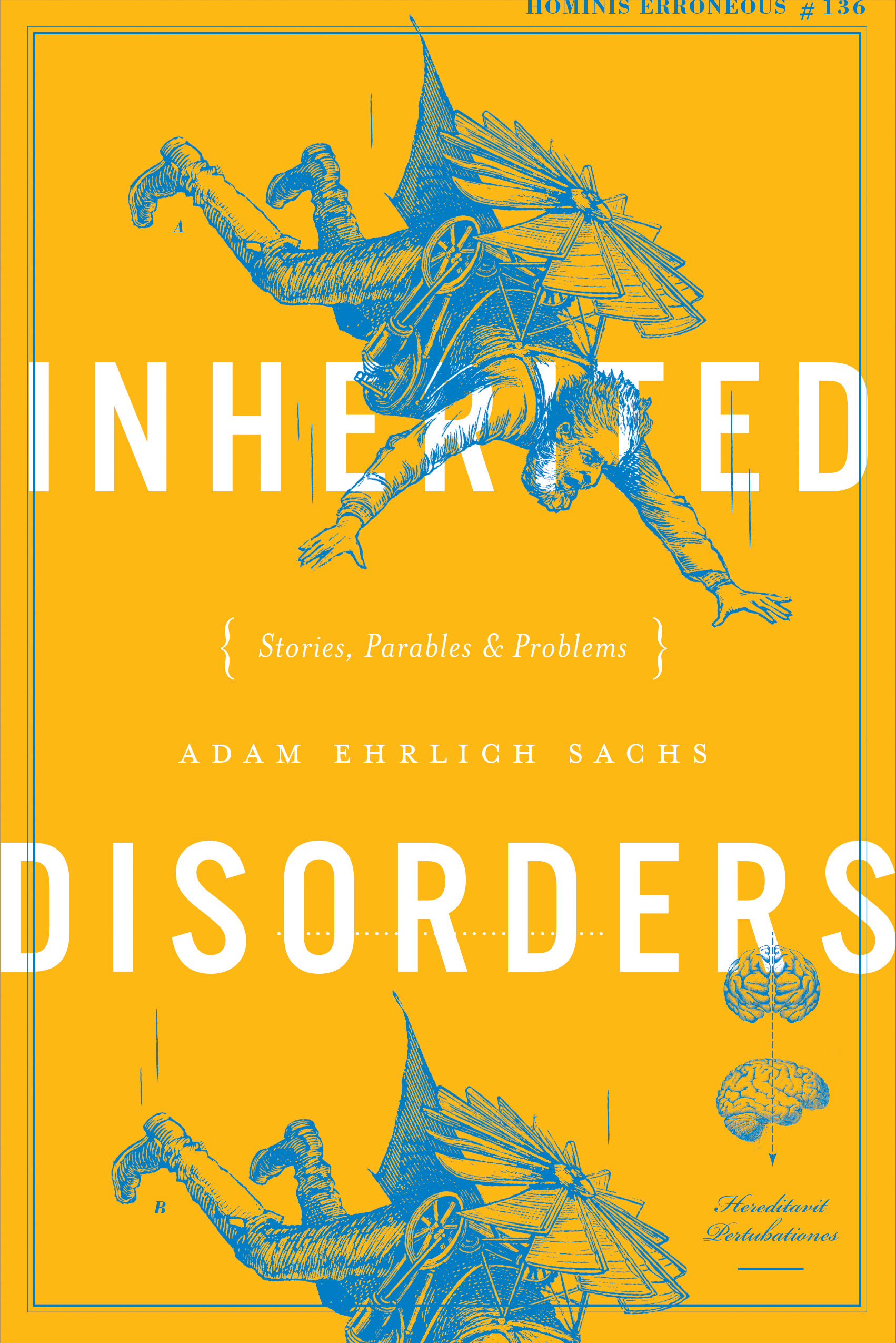