What would happen if you put Vin Diesel, Dwayne Johnson, Jason Statham and Die Hard-era Bruce Willis in a bucket and stirred them together with a big stick? You'd get something like Action Dude. That's his real name. He used to be Charlie Munderdrew, but he changed it.

Action Dude lives for danger and excitement. He's always jumping out of helicopters, crashing ships, running along the tops of cranes and walking out of buildings just before they explode. He's nine years old and also the bravest action hero there ever was. Except that he's terrified of spiders. (But don't ever tell anyone that!)

When a theme park full of robots goes haywire, it's up to Action Dude to come to the rescue. After all, no one else is crazy enough to just walk in there and save everyone.

The audio rights are handled by Gordon Wise. 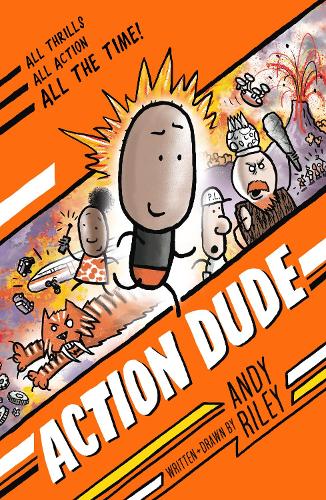