This taut and propulsive novel opens on the nameless narrator, a struggling author, stuck at the airport, his flight to Germany endlessly delayed. He stumbles upon an old classmate of his, Jeff, who is waiting for the same flight. The charismatic Jeff invites the narrator to drinks, and there, swearing him to secrecy, begins telling him the fascinating and disturbing story of his life, starting with a pivotal incident from his youth.

Alone on the beach, he noticed a man drowning in the rough surf, his fate resting in Jeff’s hands. Overwhelmed but ultimately determined to help, Jeff rescued and resuscitated the unconscious man. Unexpectedly traumatized by the event, Jeff develops a fixation on the man he saved, sure that they are now inextricably linked.
Upon discovering that the man, Francis, is a renowned art dealer, Jeff finds a job at his gallery in hopes of connecting with Francis and processing the event. Even though Francis seems to have no recollection of the incident, he takes Jeff under his wing, and Jeff becomes increasingly involved in Francis's life, dating his daughter and attending important art world parties. As the two grow closer, Jeff notices some of Francis’s more unsavory characteristics—his tendency to cheat artists and carry on affairs—but, convinced that their encounter on the beach is fated, brushes his concerns aside and continues to pursue a deeper connection with Francis, even as the nature of their relationship grows darker.

This layered, psychologically astute novel grapples with the often-illusory nature of choice and the ways we deceive ourselves and each other as our narrator struggles to separate the fact from fiction in Jeff’s story. Unsettling and morally complex, Mouth to Mouth is surprising to the end.

Claire Nozieres manages the translation rights for Mouth to Mouth

Mouth to Mouth is a taut, heady thriller narrated by a man who saved another man's life and wouldn't let him forget it

This is a compact novel, with only a single story to tell, and Wilson intends to tell it well… This book is an entertainment to be consumed quickly, a postprandial diversion after lunch, the power of the ride it takes us on to be savored only for a few moments before an announcement of evening cocktails.

Antoine Wilson has written a spellbinding novel of laserlike insight and exquisite technique that reveals how stories can function to conceal other stories. I read this book in one rapturous sitting, jotting down line after line, riveted until the final shocking, clarifying sentence.

[A] carefully sculpted masterpiece… Mouth to Mouth provokes deep philosophical questions about the nature of truth and fiction.

A gloriously addicting tale of decisions and deception… Despite the story being a short one, it doesn’t lack suspense — and Wilson’s ending delivers.

[T]ightly coiled… Mouth to Mouth delivers a tidy story that also will make readers wonder how much of Jeff’s story is true and how much is just a good yarn.

A fascinating contemporary twist on the classic 'as told to' novel, Mouth to Mouth strands two old acquaintances in an airport VIP lounge, where we are alternately charmed and alarmed by a fantastic tale of love, fate and a meteoric rise in the art world. Mesmerizing.

The sinewy and mesmerizing narrative of Antoine Wilson’s masterful novel aims straight at the heart of the mythologized self, which, like the world of art and commerce that provides the story’s backdrop, trades in all forms of performance and deception. Not unlike the novel itself, which asks us to believe and doubt and then believe again within the space of a single sentence. Wilson’s on a high wire and he never makes a wrong move.

Marisa Silver, author of Little Nothing and The Mysteries

"This austere and addictive novel interrogates the very nature of identity, destiny and storytelling."

Antoine Wilson has written a stunner of a novel. Mouth to Mouth shook and thrilled me from the first page to the last.

Antoine Wilson's Mouth to Mouth is sleek, swift, and graceful, an agile novel of ideas with unexpectedly sharp teeth.

Wilson’s Mouth To Mouth is the best book I’ve read
in ages. Narratively ingenious, delicately written, intriguingly plotted, it is literature of the highest quality. I see you now, dear Reader, with this novel in your hand and already losing track of time…. 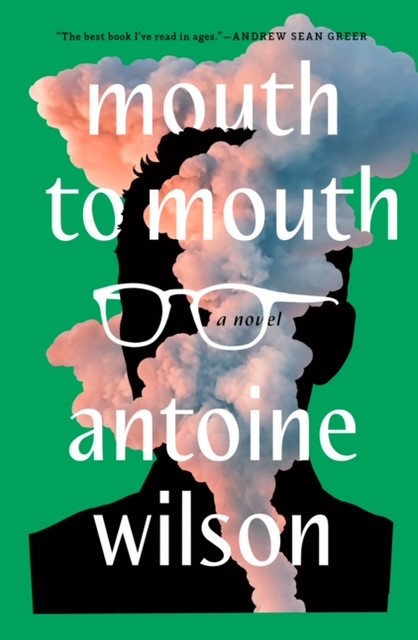