Longlisted for the Booker Prize 2021

A young man journeys into Sri Lanka’s war-torn north in this dreamlike novel of desire, loss, and the legacy of war from the award-winning author of The Story of a Brief Marriage.

“The closest we seem to get to the present are those brief moments we stop to consider the spaces our bodies are occupying, the intimate warmth of the sheets in which we wake, the scratched surface of the window on a train taking us somewhere else...”

A Passage North begins with a message from out of the blue: a telephone call informing Krishan that his grandmother’s caretaker, Rani, has died under unexpected circumstances—found at the bottom of a well in her village in the north, her neck broken by the fall. The news arrives on the heels of an email from Anjum, an impassioned yet aloof activist Krishnan fell in love with years before while living in Delhi, stirring old memories and desires as he tries to come to terms with Rani’s death.

As Krishan makes the long journey by train from Colombo into the war-torn Northern Province for Rani’s funeral, so begins an astonishing passage into the innermost reaches of a country. At once a powerful meditation on absence and longing, as well as an unsparing account of the legacy of Sri Lanka’s thirty-year civil war, this procession to a pyre “at the end of the earth” lays bare the imprints of an island’s past, the unattainable distances between who we are and what we seek.

Written with precision and grace, Anuk Arudpragasam’s masterful new novel is a poignant memorial for those lost and those still living, an uncompromising attempt to come to terms with life in the wake of total destruction.

Claire Nozieres manages the translation rights for A Passage North

Anuk Arudpragasam is an artist of revelations. In A Passage North, he continues to map, with beauty, grace, and fire, the responsibilities we carry in a world that is forever on the brink. This is a novel as both an elegy and a love song, not only for a place, but for the souls, living and dead, who are bound to that place—what an unforgettable and perfect reading experience, and one that unearths truths, relentlessly, magically.

Paul Yoon, author of Run Me to Earth

Mesmerizing, political, intimate, unafraid -- this is a superb novel, a novel that pays such close, intelligent attention to the world we all live in.

‘A politicised, profoundly contemplative novel, more akin to Albert Camus’ The Plague than most contemporary fiction… there is rare beauty in the novel’s evocation of scarred physical and emotional landscapes, and a deeply considered effort to explore the interior life’

‘[A] gentle stretch of the mental muscles, and the sense of being taken to somewhere new… aesthetically fine… a timely, and timeless, mediation of collective memory… Long sentences… read at times like Henry James after a good edit… The prose is so beautiful that it would be perfectly satisfying… to go on quoting it all day… [W]ar, death and loss are so exquisitely rendered you almost want more’

A Passage North is written with scrupulous attention to nuance and detail. Its world is the deeply-layered, rich interior of its protagonist's mind but also contemporary Sri Lanka itself, war-scarred, traumatized.  While the
narrative is filled with images of violence and loss, at its center is an exquisite form of noticing, a way of rendering consciousness and handling time that connects Arudpragasam to the great novelists of the past.

A novel of tragicpower and uncommon beauty. In his depiction of the processes through which history sculpts human fate, Anuk Arudpragasam achieves something akin to grace.

A novel of tragic power and uncommon beauty. In his depiction of the processes through which history sculpts human fate, Anuk Arudpragasam achieves something akin to grace.

Anuk Arudpragasam’s first book already showed what a fine novelist he is, and this second novel provides proof, if any were needed, that he is a major writer, vastly accomplished. Life is short but memory is long. In the aftermath of war, Arudpragasam’s rich, rewarding sentences return the reader to all that is living.

A Passage North is a singular novel by a singular writer and richly deserves its place on the Booker longlist.

Arudpragasam unpacks exactly how our inner circuitry is forever rewired during instances, war-driven or otherwise, that enable closeness or disconnection, that lead to absences or ruptures.

A disquieting and contemplative book that seeks to comprehend the incomprehensible… The political landscape of a genocide is… starkly related… Particularly affecting is the guilt – survivor guilt – that Krishnan feels… An eye-opener for Western readers unaccustomed to war, or to thinking about the consequences… The characterisation of women in [Krishnan’s] life is deft and complex… the portrait of the grandmother is outstanding… Anjum is an equally multifaceted creation… With considered thoughts on everything from smoking to meditation, life and death, [Arudpragasam’s] new novel is a treasure trove of insight and wisdom, a reminder of “how large and unknown the world was, how much it seemed to contain."

A novel of philosophic suspense, one whose reader
shivers in anticipation not of what will happen next but of where the next thought will lead…A luminously intelligent, psychologically intricate novel—slow in always rewarding ways.

A young man ruminates about Sri Lankan history and his own life in the introspective latest from Arudpragasam…Readers who enjoy contemplative, Sebaldian narratives will appreciate this.

In Anuk Arudpragasam's elegantly discursive second novel, memory, trauma and collective action determine the arc of lives. Arudpragasam expertly captures the ambiguity of romance between two young people who feel the call of the broader world even as they cling to each other. [His] writing is exceptionally graceful.

Anuk Arudpragasam's A Passage North is a profound and disquieting account of the making of a self, of the pressures of history, desire, will, and chance that determine the shape of a life. It's difficult to think of comparisons for Arudpragasam's work among current English-language writers; one senses, reading his two extraordinary novels, a new mastery coming into being.

Garth Greenwell, author of Cleanness and What Belongs to You 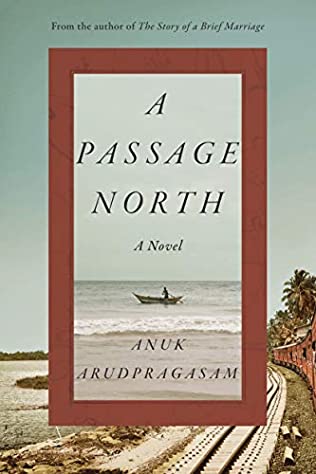