The first production by Inspector Sands, Hysteria was inspired by the T.S. Eliot poem of the same name and is play about panic, the apocalypse and table manners.

A man and a woman are on a first date and it is the most awkward dinner date of their lives. As their mortified waiter looks on they are caught up in an arresting world where the main course is a fight for survival and a banana can reduce you to tears.

The production brought together a bold physcial style with visceral sound and lighting. It sold out at the Edinburgh Festival and London International Mime Festival and has since toured extensively in Britain, China, Russia, Germany, Romania and Armenia. Along with its Total Theatre Award 2006 it has also won the Brighton Argus Angel Award 2007.

Co-written and co-created with Lucinka Eisler and Giulia Innocenti. 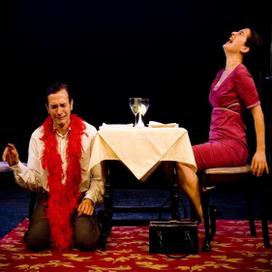