The Smell of Reeves and Mortimer

The show mixed studio-set comedy with pre-recorded sketches which frequently parodied other television programmes, and introduced a host of new characters including the spoof folk duo Mulligan and O’Hare, the bra-wearing men, and their own take on the glam-rock group Slade.
Media 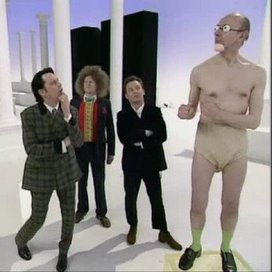