Then an opal miner is found crucified and left to rot down his mine. Nothing about the miner’s death is straightforward, not even who found the body. Sydney homicide detective Ivan Lucic is sent to investigate, assisted by inexperienced young investigator Nell Buchanan.

But Finnigans Gap has already ended one police career and damaged others, and soon both officers face damning allegations and internal investigations. Have Ivan and Nell been set up, and if so, by whom?

As time runs out, their only chance at redemption is to find the killer. But the more secrets they uncover, the more harrowing the mystery becomes, as events from years ago before take on a startling new significance.

For in Finnigans Gap, opals, bodies and secrets don’t stay buried for ever.

A superb standalone thriller from the acclaimed and award-winning author of the international bestsellers Scrublands, Silver and Trust.

A brick of a book but the tale keeps you stuck to the story like an Outback miner's shirt to his back.

Opal Country marks a return to form for the gifted Australian novelist. In Opal Country he returns to the outback and the small town of Finnigans Gap, where a dwindling band of miners is trying to find opals in a nearly exhausted seam. When one of them is found dead, a detective from Sydney is sent to assist the local police. The setting plays to Hammer’s strengths, allowing him to lay bare the rivalries in a town that’s dying on its feet.

A brick of a book but the tale keeps you stuck to the story like an Outback miner's shirt to his back.

For those who like their crime fiction rich in social commentary there’s a healthy dose of contemporary themes in the background to the murders, from city corruption to rural decline, racism to religious fanaticism and climate change [...] This is a meaty tale with plenty of originality and excitement. 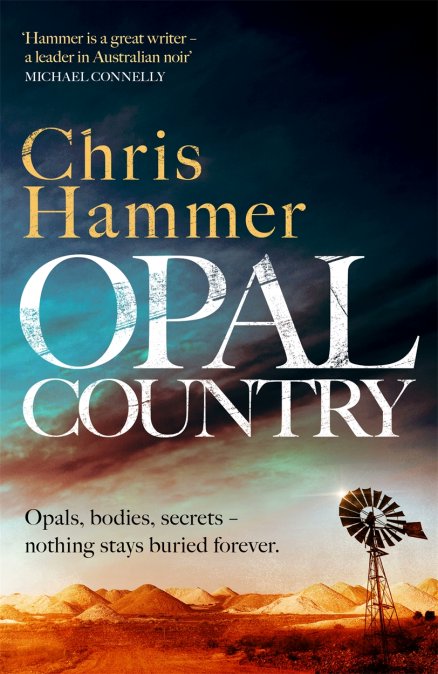