In an isolated country town afflicted by interminable drought, a charismatic and dedicated young priest calmly opens fire on his congregation, shooting dead five parishioners before being gunned down himself.

A year later, accompanied by his own demons from war-time reporting, journalist Martin Scarsden arrives in Riversend. His assignment is deliberately simple: describe how the townspeople are coping as the anniversary of their tragedy approaches. But as Martin meets the locals and hears their version of events, he begins to realise that the accepted wisdom – that the priest was a paedophile whose imminent exposure was the catalyst for the shooting, established through an award-winning investigation by his own newspaper – may be wrong.

Just as Martin believes he’s making headway, a dramatic new development rocks the town. The bodies of two German backpackers - missing since the time of the church shootings - are discovered in a dam in the scrublands. It's the biggest story in Australia, the media arrive en masse. Instead of gently easing back into reporting, Martin finds himself thrown into a media storm, and with it a complex mystery.

What was the real reason behind the priest’s shooting spree? And how does it connect to the backpacker murders, if at all? Martin struggles to uncover the town’s dark secrets, putting his job, his mental state, and his life all at risk as events escalate around him.

The audio rights are handled by Grace Heifetz.

Strap yourself in for a thrilling ride as Aussie crime fiction doesn't get much better than this.

Brilliant and unsettling, Scrublands stands at the junction of Snowtown and Wake in Fright, that place where Australia’s mirage of bush tranquility evaporates into our hidden fears.

Scrublands kidnapped me for 48 hours. I was hopelessly lost in the scorching Australian landscape, disoriented but completely immersed in the town and people of Riversend, as the heat crackled off the pages. I was devastated when it was time to go back to the real world. This book is a force of nature. A must-read for all crime fiction fans.

Sarah Bailey, author of The Dark Lake and Into the Night

Hammer’s portrait of a dying, drought-struck town numbed by a priest’s unimaginable act of violence will capture you from the first explosive page and refuse to let go until the last. His remarkable writing takes you inside lives twisted by secrets festering beneath the melting heat of the inland, the scrub beyond waiting to burst into flame. Scrublands is the read of the year. Unforgettable.

A superbly drawn, utterly compelling evocation of a small town riven by a shocking crime.

Dervla McTiernan, author of The Ruin

A compulsively page-turning thriller where the parched interior looms as large as the characters.

The complexities of the narrative and its characters are mind-boggling – but always presented cogently with often impressive prose and brilliant plotting from this debut author with decades of experience as a journalist himself. This ‘why dunnit’ as opposed to ‘who dunnit’ is a remarkable study of human fallibility, guilt, remorse, hope and redemption. The descriptions of landscape are often evocative and Winton-like, with the parched country-town setting reminiscent of Jane Harper’s The Dry.

A spacious and brilliant fictional debut.

This sprawling and explosive Outback thriller from Hammer is simply a masterpiece.

So vivid you have to pinch yourself ... a pacy crime thriller enveloped in the rich colours and breathless heat of the Aussie landscape.

Scrublands is that rare combination, a page-turner that stays long in the memory.​

Chris Hammer is a great writer -- a leader in Australian noir.

Scrublands is the epic novel about rural life in Australia that we need right now. In its concern with crime beyond the suburban fringe, it sits right up there with the late Peter Temple's Broken Shore, Garry Disher's Bitterwash Road and Jane Harper's The Dry, even as it extends their focus and reach.

A heatwave of a novel, scorching and powerful. This extraordinary debut, perfect for readers of the magnificent Jane Harper, seared my eyes and singed my heart. Don't miss it.

A J Finn, author of Woman in the Window

This sharply observed slice of outback noir makes good use of it's closed-world setting: a sun-baked, drought-ravaged town ... well-rounded characters, masterful plotting and real breadth; this is an epic and immersive read.

Set in the blistering heat of a remote Australian town ravaged by drought and threatened by bush fires, this is a complex, meaty, intelligent mystery ... Hammer's writing is so evocative that the heat practically rises off the pages of Scrublands

A real page turner which rips along like a bush fire

Engaging, unnerving and authentic in its detail of a rural town in decline, this is an Australian crime debut that packs serious punch, singling Hammer out as an exciting author to watch out for.

Set in the parched Australian landscape, Scrublands is a brilliantly plotted thriller which reveals a town full of brooding secrets. I couldn't put this compelling debut down.

Capture[s] your imagination from the first page, full of twists and turns and secrets, full of shocking revelations.

An almost perfect crime novel, I'd say: intelligent, thought-provoking, great narrative energy, a central character who's imperfect but self-aware, and of course that amazing setting. As you'll have gathered, I loved it.

A dark and brilliant thriller, one that lingers in the mind.

Shimmers with heat from the sun and from the passions that drive a tortured tale of blood and loss.

Atmospheric, utterly gripping and written with devastating beauty. Scrublands is as scorching as wildfire and as hard to look away from.

Gytha Lodge, author of She Lies in Wait

[O]ne of the finest novels of the year.

You could choke on the bone-dry atmosphere of Scrublands, Chris Hammer's gritty debut novel about a sex scandal that has left a small Australian desert town reeling.

The twists in the tale helter-skelter but the ride is intoxicating, and there's no question that this debut novel introduces another intriguing new voice to the Aussie crime landscape. 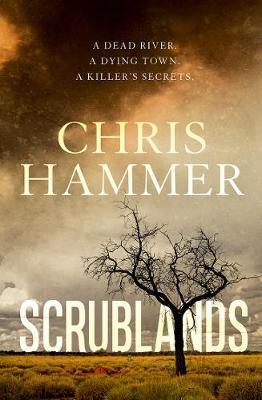