We Begin at the End

Meet the most memorable characters you will read this year

Duchess Day Radley is a thirteen-year-old self-proclaimed “outlaw.” Rules are for other people, the cowards. At school, she is the distant one, the child the other kids make fun of — her clothes are torn, her hair never properly fixed. But let them throw their sticks, because she’ll throw stones. Duchess might be a badass, but she’s really just trying to survive. She is the fierce protector of her five-year-old brother, Robin. She is the parent to her mother, Star, a single mom incapable of taking care of herself, let alone her two kids.

Walk has never left the coastal California town where he and Star grew up. He’s the chief of police, trying to keep Cape Haven, with its beautiful bluffs overlooking the sea, not only safe, but safe from becoming a cookie-cutter tourist destination for the rich. But he’s still trying to heal the old wound of having given the testimony that sent his best friend, Vincent King, to prison decades before. And he’s in overdrive protecting Duchess and Robin as Star slip slides deeper into self-destruction.

Now, thirty years later, Vincent is being released. As soon as he steps one foot back into his childhood town, trouble arrives. It shows up on Walk’s and Duchess’s doorsteps, and they will be unable to do anything but usher it in, arms wide closed.

With resonances readers will feel in their bones, We Begin at the End looks at family — the ones we are born into and the ones we create. It shows how revenge and justice are often two very different things. It reveals how doing right can easily be wrong. Chris Whitaker’s characters — Duchess, Walk, and everyone they love and whose hearts they break, who deserve so much more than life serves them — will brand your own heart. This novel is a modern-day masterpiece.

Beautiful writing, characters that live on in your memory long after you've turned the last page. Excellent.

Mason Cross
Author of What She Saw Last Night

This is an accomplished and moving story of crime, punishment, love and redemption.

I LOVED this book. From the riveting plot, to the beautiful writing. But mostly what kept me longing to get back to it each day were the characters, especially young Duchess. Fierce, brave, vulnerable she leaps off the page fully formed. As does Walk. How aptly named. A chief of police on his own inexorable journey. This is a book to be read and re-read and an author to be celebrated.

Magnificent . . . an instant classic, a West Coast Where the Crawdads Sing . . . a special, vital novel. I'm grateful to have read it.

A.J. Finn
#1 NYT bestselling author of The Woman in the Window

A stunning and heartbreaking book - will keep you gripped until the last moving page.

Claire McGowan
Author of What You Did

'This intensely captivating story and its uniquely intriguing characters holds you in its jaws till the very last word. Astonishingly good.'

An exceptionally beautiful and accomplished crime novel. I fell head over heels into its big black heart and will carry the characters with me for a long time to come yet.

Ali Land
Author of Good Me Bad Me

Breathtaking, heart-wrenching, heart-warming and laugh-out-loud funny, We Begin at the End is simply astonishing. Easily the best book I've read this year.

An absolute belter of a book. Superb, heart-breaking, astounding and gripping. Chris Whitaker has totally nailed it.

Gytha Lodge
Author of She Lies in Wait

We Begin at the End is stunning - thrilling, moving, beautifully written.  ​

Paul Burston
Author of The Closer I Get

Astoundingly beautiful. No other writer can pull you in quite so well as Chris Whitaker. The writing is pure and sharp, the characters perfectly drawn, the story unforgettable.

Emotionally wrung out after reading We Begin at the End. Chris Whitaker is one of the few authors who can genuinely make me cry. Rock on Duchess and Thomas Noble ... this may be my book of the year.

C J Carver
Author of Spare Me the Truth

Hands down, one of the best books I've ever read. In my life. There's a bit at the end which is so overwhelmingly sad I can barely breathe just thinking about it. An absolutely astonishing novel and the writing is breathtaking.

We Begin at the End really reminds me of ‘To Kill a Mockingbird.’ And the spirit of Scout is very much alive in Duchess. A crime novel, or maybe a novel about crime, and yet so much more.

'One of the year's best crime reads.'

'It truly is a masterpiece.'

Isabelle Broom
Author of One Thousand Stars and You

'The most beautifully written book I have read this year.'

Lisa Hall
Author of Between You and Me

'A remarkable achievement ... writing that is Booker Prize good.'

'An exceptional novel. Duchess Day Radley is now my favourite character in fiction.'

'As perfect a novel as you'll read all year.'

'An absolute masterclass in crime writing and story-telling.'

Jo Spain
Author of The Confession

Will Dean
Author of Red Snow

'A damn near perfect crime novel.'

Fiona Cummins
Author of The Neighbour

Chris Whitaker's third novel, We Begin at the End, is the kind of breakout book that publishers dream about. Rich with character and story, conflict and tension, humor, tragedy and raw, unadulterated guts, this one has it all. Throw in the most compelling young protagonist I've read in at least a decade, and you have a deep and meaningful story that is an absolute delight from first page to last. Nicely done, Mr. Whitaker!

John Hart
Author of The Hush

Chris Whitaker takes crime writing to new levels in this evocative and lyrical novel, which is not only beautifully written but cleverly plotted, with a climax you'll never guess.

I love Duchess Day Radley so much I want to adopt her. She is every thirteen-year-old girl at risk, an outlaw both pure of heart and ill of intent, a fierce and melancholy girl, so memorable she will make camp in your brain and never leave. In We Begin at the End, Chris Whitaker has written a gorgeous, crystalline novel, a cautionary tale about the long shadows cast by our past selves, and one defiant girl with the bravery to hope for something better. I love this beautiful book. 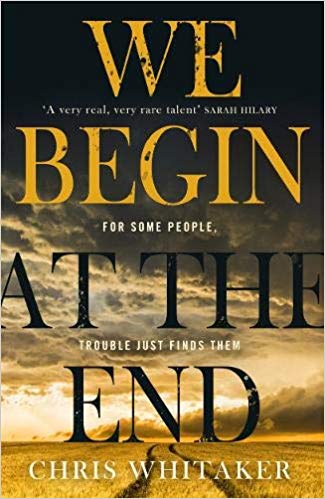