Colin adapted the short story A Report to an Academy by Franz Kafka into a one man show for the Young Vic in 2009, the production was revived at the Bouffes du Nord Theatre in Paris in September 2010. The play returned for a second successful run at The Young Vic in 2011 before embarking on a world tour.

Esteemed members of the Academy! You have done me the great honour of inviting me to give you an account of my former life as an ape.

Imprisoned in a cage and desperate to escape, Kafka's monkey reveals his journey to become a walking, talking, spitting, smoking, hard-drinking man of the stage.

It’s a remarkable spectacle that gently breaks your heart. ****

Sam Marlowe
The Times
"a superb piece of writing, peerlessly embodied by Kathryn Hunter." *****
Time Out
"In its disorientating, almost grotesque, blend of human and simian, Hunter's performance is the word Kafkaesque made flesh"  Alice Jones
The Independent
"an extraordinary mediation on identity and one of the most entertaining and affecting things I have seen on stage." Viv Groskop
The Times
"a performance of staggering versatility" ****  Michael Billington
The Guardian 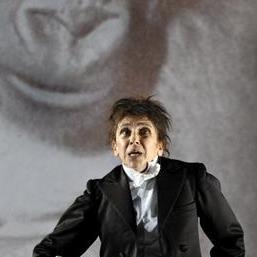