Colin radically re-worked Ibsen's classic verse play about one young man's journey into old age and his moral choices. The inventive production was first produced at Dundee Rep with the National Theatre of Scotland in 2007 to great critical acclaim, it was then revived for a run at the Barbican in London and a national tour in 2009.

Peer Gynt is a dreamer, a liar and a serial womaniser. Cast out from his hometown, Peer embarks on a wild and astonishing journey in search of fame and fortune that takes him from Norway to Africa and eventually back home again. An exhilarating tale of a life lived on the edge.

Media
Reviews
a show to shout about from the rooftops *****
The Scotsman
In Colin Teevan's brilliant new translation, Ibsen's folk tale becomes a scabrous 'old whore of a tale' Mark Fisher
The Guardian
Colin Teevan's new version of the text is subperb...fresh, frank [and] hard edged
The Scotsman 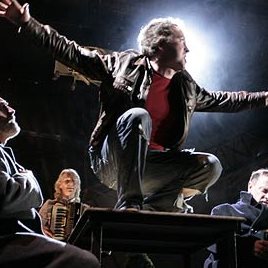