2010 was the 25th Anniversary of the first publication of Blood Meridian. Vintage published a new edition to mark the occasion.

Critics have compared Cormac McCarthy's nightmarish yet beautifully written adventure masterpiece, Blood Meridian, or the Evening Redness in the West, with the best works of Dante, Poe, De Sade, Melville, Faulkner, Flannery O'Connor and William Styron. The critic Harold Bloom, among others, has declared it one of the greatest novels of the Twentieth Century, and perhaps the greatest by a living American writer. Critics cite its magnificent language, its uncompromising representation of a crucial period of American history, and its unapologetic, bleak vision of the inevitability of suffering and violence.

The novel recounts the adventures of a young runaway, the kid, who stumbles into the company of the Glanton Gang, outlaws and scalp-hunters who cleared Indians from the Texas-Mexico borderlands during the late 1840's under contract to territorial governors. Reinvisioning the ideology of manifest destiny upon which the American dream was founded, Blood Meridian depicts the borderland between knowledge and power, between progress and dehumanization, between history and myth and, most importantly, between physical violence and the violence of language.

A classic American novel of regeneration through violence.  McCarthy can only be compared to our greatest writers. Michael Herr

Blood Meridian makes it clear that all along Mr. McCarthy has asked us to witness evil not in order to understand it but to affirm its inexplicable reality; his elaborate language invents a world hinged between the real and surreal, jolting us out of complacency. Caryn James
The New York Times Full Review
McCarthy’s achievement is to establish a new mythology which is as potent and vivid as that of the movies, yet one which has absolutely the opposite effect . . . He is a great writer.
The Independent 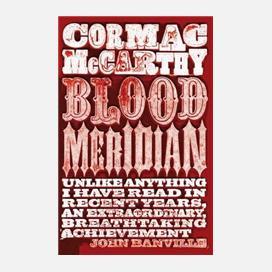