The Nine Lives of Pakistan

With its reputation for volatility, brutality and radical Islam, Pakistan's demise has been regularly predicted. But things rarely turn out as expected, as renowned journalist Declan Walsh knows well. Over a decade covering the country, his travels took him from the raucous port of Karachi to the gilded salons of Lahore to the lawless frontier of Waziristan, encountering Pakistanis whose lives offer a compelling portrait of this land of contradictions.

He meets a crusading lawyer who risks her life to fight for society's most marginalised, taking on everyone including the powerful military establishment; an imperious chieftain spouting poetry at his desert fort; a roguish politician waging a mini-war against the Taliban; and a charismatic business tycoon who moves into politics and seems to be riding high – till he takes up the wrong cause. Lastly, Walsh meets a spy whose orders once involved following him, and who might finally be able to answer the question that haunts him: why the Pakistanis suddenly expelled him from their country.

Intimate and complex, unravelling the many mysteries of state and religion, this formidable book offers an arresting account of life in a country that, often as not, seems to be at war with itself.

The Nine Lives of Pakistan won the Overseas Press Club of America Cornelius Ryan Award for best non-fiction book on international affairs in 2021.

There isn't a wonky paragraph in 300 pages

A vivid, complex portrait of a country at a crossroads. . . Walsh’s writing is elegant and expressive. It does what the best foreign correspondence should: transport the reader.

‘This thrilling, big-hearted book is, in part, Walsh’s attempt to understand how his relationship with a country he clearly adores reached such a pass […] particularly good with rogues […] ‘a richly observed study of how humans respond to the extraordinary pressures of a sometimes-choking society; empathetic, but hard-nosed and never veering into hagiography.’

Clear-sighted and exhaustive, these dispatches paint a scrupulously layered portrait of a country that defies easy exploration

An irresistible combination of storytelling panache and in-depth knowledge; Declan Walsh brings vividly to life characters and situations that illuminate some of the most significant phases of Pakistan’s history.

If you want to read one book about contemporary Pakistan, it has to be The Nine Lives of Pakistan. An intimate yet sweeping account of Pakistan's contemporary history. Walsh is a rare foreign correspondent who doesn't condescend, a story teller who lets his characters speak. Although I am familiar with most of the events and characters Walsh writes about, his retelling left me breathless.

In The Nine Lives of Pakistan, Declan Walsh describes, with intellectual power and cool elegance, a much-misunderstood country. All those interested in South Asia and its complex politics and culture should read it.

Captivating.... Walsh is a wonderful writer, with a gift for sketching an impression of a place, time and ambience with a few brief lines. He knows how to interweave travelogue with an account of the relentless tensions that always threaten to burst through each vignette in the book. What also shines through is the relish with which Walsh throws himself into the far corners of Pakistan, into crowds, celebrations and rites, with a drive born of fascination with the land and its people.

A wonderful book which sets a new benchmark for non-fiction about the complex palace of mirrors that is Pakistan. Star NYT foreign correspondent Declan Walsh has a rapier wit, a talent for skillfully sketched pen portraits and a sharp eye for tragedy, paradox and absurdity. With The Nine Lives of Pakistan he has produced a beautifully, lightly, fluently written book that is as profoundly nuanced as it is sharply perceptive. 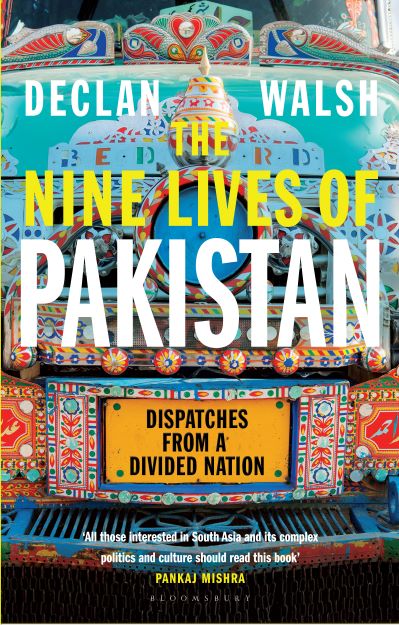