Jack Holmes and His Friend

Jack Holmes and Will Wright arrive in New York in the calm before the storm of the 1960s. Coworkers at a cultural journal, they soon become good friends. Jack even introduces Will to the woman he will marry. But their friendship is complicated: Jack is also in love with Will. Troubled by his subversive longings, Jack sees a psychiatrist and dates a few women, while also pursuing short-lived liaisons with other men. But in the two decades of their friendship, from the first stirrings of gay liberation through the catastrophe of AIDS, Jack remains devoted to Will. And as Will embraces his heterosexual sensuality, nearly destroying his marriage, the two men share a newfound libertinism in a city that is itself embracing its freedom.

Moving among beautifully delineated characters in a variety of social milieus, Edmund White brings narrative daring and an exquisite sense of life’s submerged drama to this masterful exploration of friendship, sexuality, and sensibility during a watershed moment in history.
Rights

This new novel achieves a greater clarity and a deeper empathy, and for these grown up virtues it should be justly celebrated.
The Telegraph
Engaging and erotic.
The Observer
An elegantly stylish novel that deals grippingly with that subject we never tire of.
The Financial Times
One of America’s greatest living writers.
Herald (Glasgow)
White narrates an exquisitely sensual tale of love, lust and friendship.
Attitude Magazine
A masterpiece.
Scotsman
Lithe, witty, penetrating.
The Times
An impressive and thoroughly enjoyable novel. Alex Clark
The Guardian Full Review
White’s writing is beautiful, and he has a superb intimacy with his utterly convincing characters.
Saga Magazine
A thoughtful, funny, tough and slightly melancholy exploration of the conflicting attractions of excitement and stability, and the pleasures and costs of hedonism.
The Daily Mail
Radiates a melancholic charm.
The Irish Times
A treat. Boyd Tonkin
The Independent Full Review
Brilliant, moving and hilarious book. Gary Shteyngart
Full Review
An incredibly moving novel. Sam Lipsyte
Full Review
Edmund White is one of the three or four most virtuosic living writers of sentences in the English language. Dave Eggers

A wonderfully crafted story.
Windy City Times Full Review
Jack Holmes and His Friend is a comedy of manners, which ingeniously uses the system of doubling the gay hero by offering him an alter ego who is straight.
The New York Review of Books Full Review
The novel maintains an artful balance between social history and individual tale. Changes in sexual mores, sexual politics and social prejudices serve as a narrative backdrop that's only half-registered while Jack's and Will's personal and professional concerns take center stage, White being well aware that people are often more absorbed in their own dramas than the times they inhabit….As always, White's descriptions jump out at you.”
Seattle Times

Though the novel ends, it doesn't do so neatly, with the loose ends tied up. What remains is that delicious frustration that, like Jack and Will's struggles, make you want to go back to the beginning and watch it play out again.


Minneapolis Star Tribune Full Review
Friendship between gay and straight in 'Jack Holmes'
The novel maintains an artful balance between social history and individual tale. Changes in sexual mores, sexual politics and social prejudices serve as a narrative backdrop that's only half-registered while Jack's and Will's personal and professional concerns take center stage, White being well aware that people are often more absorbed in their own dramas than the times they inhabit.
Michael Upchurch
The Seattle Times Full Review
In chapter after chapter, White proves himself to be one of the finest practitioners of angst-ridden scene making about people in love with desire and desirous for real love.
NPR News: All Things Considered Full Review
One of the best novelists at work today, White spins an entangling—and thoroughly entertaining—yarn.
Kirkus Reviews Full Review
A well-drawn story that also serves as an important reconstruction of a time and situation important in the evolution of gay social acceptance.
Booklist Full Review
The Way We Were: In His 10th Novel, Edmund White Again Draws on Personal Experience
Poignant. Hannah Gersen
The New York Observer Full Review
Edmund White who wrote The Beautiful Room Is Empty. Edmund White who gave us A Boy’s Own Story as well. It is as if he owes it to us to always excel. And we owe it to him to always read, nod, and approve. And this reader does, he nods and approves. The New York Journal of Books
Vinton Rafe McCabe Full Review
Once again White cements his place in the literary world. Amos Lassen
Windy City Times Full Review
Edmund White&rsquo;s Body Language
White delivers something rare. Kate Christensen
The New Times Book Review Full Review
In tender prose, White does justice to the erotic potential of the story, with abundant and charged descriptions of sex…an elegant study of the paradoxes and half-truths that emerge in long-standing friendships.
The New Yorker Full Review
Read <em>Jack Holmes &amp; His Friend</em> Now
Read Jack Holmes & His Friend now. Daily Candy
Full Review
Arguably [White’s] greatest [novel] yet.
Gay San Diego Full Review
[White’s] prose is always most alive when it sneaks underneath the sheets. In Jack Holmes & His Friend, White is in top form.
Entertainment Weekly Full Review
Bold and moving, a reflection on masculinity, sexuality and the corrosive effect of unrequited love.
Word Magazine
An intimate and moving study of unrequited love... his best novel yet.
Sunday Times Ireland
This comedy of sexual manners may be White’s finest novel.
The Sunday Times 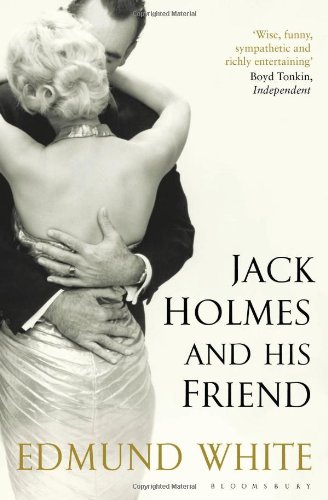