It is 1950, and nine-year-old Willa's sheltered childhood is about to come to an end when her two new stepbrothers arrive at her family's summer home in British Columbia. As Willa's older sister pairs off with the older of these boys, Willa finds herself alone in the off-kilter company of the younger, Patrick. When, one afternoon, Patrick lures Willa into a dilapidated rowboat, Willa embarks upon an increasingly damaging relationship with Patrick, one that will forever reconfigure her understanding of herself and her place in a menacing, male-dominated world.

Demi-Gods traces the tumultuous years of Willa's coming-of-age, as she is drawn further into Patrick's wicked games. Though they see each other only a handful of times, each of their encounters is increasingly charged with sexuality and degradation. When Willa finally realizes the danger of her relationship with Patrick, she desperately tries to reverse their dynamic, with devastating results.

Daring, singular, and provocative, Demi-Gods explores a girl's attempt to make a life of her own choosing in a world where woman's independence is suspect, a world that threatens to claim a woman's body as a mere object for men's pleasure. A sensitive, playful, and entirely original evocation of the dualities within ourselves and our history, Eliza Robertson's novel announces her as one of the most exciting new voices in contemporary literature.

Atmospheric and lushly detailed, Demi-Gods captures the wonder and menace of adolescence in ways both unsettling and profound.

Unsettling and compulsive, Demi-Gods is a fearless novel and Eliza Robertson a daring new novelist.

Demi-Gods is a resolutely sure-footed piece of writing, moving with fleetness and agility over its chosen terrain. It’s the work of a writer who knows how to pace herself – when to sprint and when to hang back . . . there’s never the sense of a writer straining for effect. Readers who allow themselves to get fully caught up in Robertson’s dense, disturbing prose may wonder how long it will take to free themselves from this novel’s own thrall.

It’s exciting to see boy-girl relations explored with such candor, with no room for easy answers, tidy endings, clear consent... The book is of a piece with André Aciman’s “Call Me by Your Name” and other soft-core explorations of how we mess one another up, and realize it only later.

Robertson's searing debut novel is a richly layered coming-of-age story exploring the thrills and dangers of a young girl named Willa and her adolescent sexual awakening... Robertson's deliciously enigmatic style is the perfect analogue to Willa's absorbing yet deeply haunting journey of self-discovery.

One of the most memorable first novels I’ve read in 2018.

Demi-Gods combines the unnerving, naked female candour of Elena Ferrante’s My Brilliant Friend with a darkened menace worthy of German director Michael Haneke. Eliza Robertson imbues each page with an almost perverse eroticism – all actions and even inanimate objects and innocent vegetation are charged with sexual tension. In the younger brother, Patrick, she has created one of the most convincing antagonists in recent memory – my gut churned each time he appeared on the scene.

Demi-Gods traces the border between fear and attraction. The novel throbs with ominous details—a foot on the small of a back, a jellyfish’s tendrils, a broken doll house. As Willa’s relationship to Patrick develops so does our sense of dread. Yet, it is also a book riddled with beauty—the way sunlight can transform a body, the depth of a moth’s wings, the way a girl’s body can beat to the same rhythm as the sea. Willa’s beauty is described as sly. The novel too, is sly. It will sneak under your skin.

Demi-Gods is both languid and full of menace, a slow burn that compulsively gathers heat. Robertson explores one girl’s passivity and power, and one boy’s monstrous impulses, with shocking honesty and language that is as precise and sensuous as a poet’s. This story is frighteningly real and beautifully told.

Deborah Willis, author of The Dark and Other Love Stories

Lee Henderson, author of The Road Narrows As You Go

Demi-Gods is a feat of subtlety and daring that opens with unease, builds into a dark drama, and culminates in an unforgettable scene of revenge. Robertson portrays complex relationships with breathtaking precision and compassion, revealing the human bonds that protect, falter, survive, and heal. I absolutely love this novel.

Alison MacLeod, author of All the Beloved Ghosts 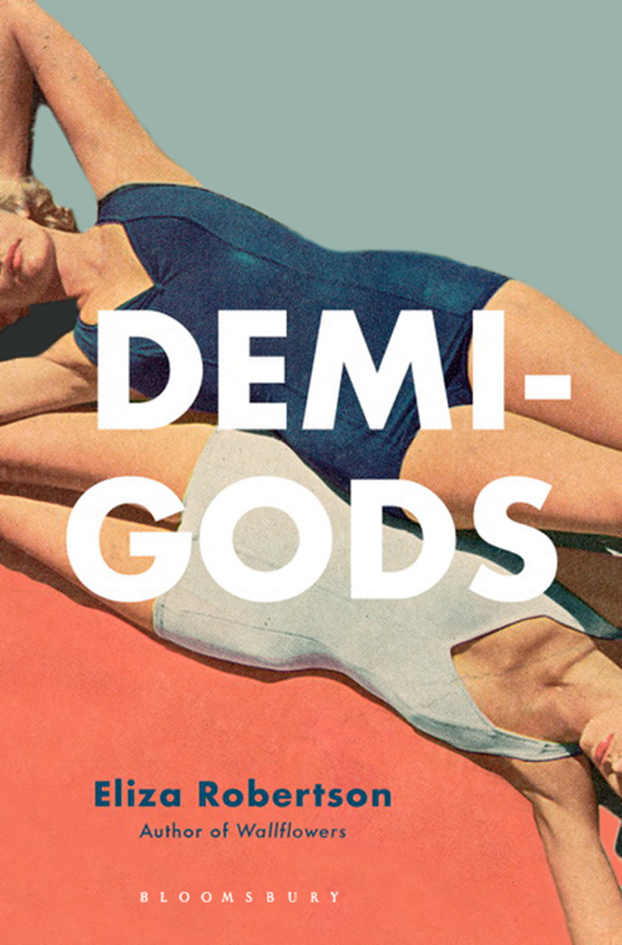