A Legacy of Spies

Peter Guillam, staunch colleague and disciple of George Smiley of the British Secret Service, otherwise known as the Circus, is living out his old age on the family farmstead on the south coast of Brittany when a letter from his old Service summons him to London. The reason? His Cold War past has come back to claim him. Intelligence operations that were once the toast of secret London, and involved such characters as Alec Leamas, Jim Prideaux, George Smiley and Peter Guillam himself, are to be held to account by a generation with no memory of the Cold War and no patience with its justifications.

Interweaving past with present so that each may tell its own intense story, John le Carré has spun a single plot as ingenious and thrilling as the two predecessors on which it looks back: The Spy Who Came in from the Cold and Tinker Tailor Soldier Spy. In a story resonating with tension, humor and moral ambivalence, le Carré and his narrator Peter Guillam present the reader with a legacy of unforgettable characters old and new.

To read this simmering novel is to come in from the cold.

This novel offers more than one pleasure. It is not merely good in itself – vintage John le Carré. It gives the reader, at long last, pieces of a jigsaw puzzle that have been missing for 54 years. . . Like wine, le Carré’s writing has got richer with age.

A Legacy of Spies achieves many things. Outstandingly, it is a defiant assertion of creative vigour . . .Cornwell is signing off with a poignant and brilliant au revoir to le Carré, his alter ego, a writer who is with the immortals.

A Legacy of Spies deploys a complex and ingeniously layered structure to make the past alive in the present once more . . . le Carré has not lost his touch

It is a splendid novel…It is riveting, bitter and will be controversial . . . le Carré’s handling of dialogue remains perfectly fresh

A compelling tale of Cold War duplicity and manoeuvrings in the British secret service . . . as ever much of the pleasure of reading le Carre is that you have to be on your intellectual mettle

Part of the pleasure of this novel is that the characters seem so much cleverer than we are . . . haunting, fascinating . . . it also made me want to reread the entire Smiley sequence

le Carré is on absolutely cracking form. No writer has ever been better at turning the act of two people talking politely to each other across a desk into a blood sport.

[Le Carré] has always known how to make his readers hang on barbed-wire tenterhooks. He drip-feeds information with such suspense-building miserliness that our befogged state matches that of the field agents — the “joes” — who glimpse one piece of the secret jigsaw at a time.

This is a truly wonderful, morally complex, politically astute novel written with elegance and panache . . . the visceral thrill of its twists and its complexities, its edge-of-the-seat qualities.

[Le Carré’s] writing has lost none of its pith or potency . . . his powers of invention have kept up with the pace of an ever-changing and complex world.

Deeply moving in its portrait of a man adrift in a climate he no longer understands.

This really is vintage le Carré

We are back in the more interesting territory of moral uncertainty and failure. What, Smiley asks, was he fighting for?

Eloquent, subtle and sublimely paced . . . Utterly engrossing and perfectly pitched, it is a triumph

Thrilling and fascinating - a satisfying close to the saga

His writing is as crisp as ever . . . another tale of intrigue which will slip effortlessly into its place in the Smiley canon.

As] labyrinthine as you’d expect . . . le Carré has always been a master.

Razor-sharp insight from the battle-weary Guillam and fascinating glimpses into the murky spycraft at the height of the Cold War only add to the joy of this sublimely accomplished thriller.

What are we to make of Smiley? What is his game? Do we like him? Admire him? Every le Carré reader has wrestled with these questions—and A Legacy of Spies brings them to the fore more directly than any previous book.

Fans of le Carré’s earlier fiction — or their various film incarnations — will feast at the historical banquet that is 'A Legacy of Spies.'


A Legacy of Spies functions best as a reward for loyal readers: This is for those of us who have sat with Smiley for hours as he pored over intel in an office where the blasted radiator is broken and loved every damn second of it.

The ingenuity and skill with which the thing is brought off is breathtaking – really, not since The Spy has le Carré exercised his gift as a storyteller so powerfully and to such thrilling effect.

The result is both a riveting reprise of the Smiley novels and a new articulation of le Carre’s theme: spying is as morally bankrupt as the ideologies it serves... He can covey a character in a sentence, land an emotional insight in the smallest phrase—and demolish an ideology in a paragraph. 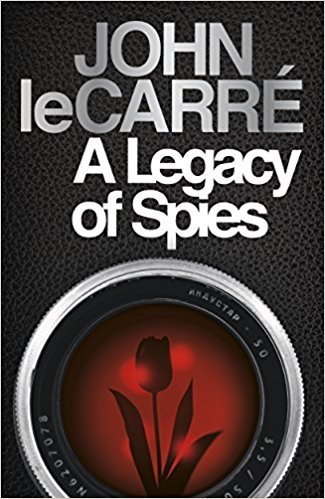