What Belongs to You

Longlisted for the 2016 National Book Awards

Longlisted for the Dublin Literary Award

Named One of the Best Books of the Year by More Than Fifty Publications, including:

The New Yorker, The Paris Review, The New York Times (selected by Dwight Garner), GQ, The Washington Post, Esquire, NPR, Slate, Vulture, The San Francisco Chronicle, The Guardian (UK), The Telegraph (UK), The Evening Standard (London), The Philadelphia Inquirer, The Miami Herald, The Millions, BuzzFeed, The New Republic (Best Debuts of the Year), Kirkus Reviews, and Publishers Weekly (One of the Ten Best Books of the Year)

Named one of Foyles Paperbacks of the Year

On an unseasonably warm autumn day, an American teacher enters a public bathroom beneath Sofia’s National Palace of Culture. There he meets Mitko, a charismatic young hustler, and pays him for sex. He returns to Mitko again and again over the next few months, drawn by hunger and loneliness and risk, and finds himself ensnared in a relationship in which lust leads to mutual predation, and tenderness can transform into violence. As he struggles to reconcile his longing with the anguish it creates, he’s forced to grapple with his own fraught history, the world of his southern childhood where to be queer was to be a pariah. There are unnerving similarities between his past and the foreign country he finds himself in, a country whose geography and griefs he discovers as he learns more of Mitko’s own narrative, his private history of illness, exploitation, and want.

What Belongs to You is a stunning debut novel of desire and its consequences. With lyric intensity and startling eroticism, Garth Greenwell has created an indelible story about the ways in which our pasts and cultures, our scars and shames can shape who we are and determine how we love.

Claire Nozieres manages the translation rights for What Belongs to You

The originality and power of Garth Greenwell’s slim novel.

What Belongs to You is a rich, important debut, an instant classic to be savored by all lovers of serious fiction.

Greenwell is, pound for pound, my favorite writer working in the English language right now, and his debut novel, What Belongs to You, is my pick for novel of the decade.

What Belongs to You is one of the most fearless and heartbreaking accounts of desire that I can remember reading.

What Belongs to You is brutally candid in its dissection of power relations, both familial and political-economic, and Mitko’s portrait is all the more convincing for being essentially two-dimensional... Greenwell’s combination of slick, economical storytelling with emotional depth and subtle, allusive moral acuity makes this a powerful and compelling debut.

What Belongs To You is concentrated brilliance, a short novel that packs an emotive and thought provoking punch.

This is a heart-breaking, important piece of work, which emphasises to us all how much our lives are made (and unmade) by how our bodies collide (or don’t) with the bodies of others.

Andrew McMillan
The Next Review

This debut novel is a superb evocation of that curious state known as love; of knowing, as the title has it, what belongs to you and realising what can never be yours...Greenwell's shimmering novel recounts an age-old story with such toughness and tenderness as to make it seem new: and that is an art in itself.

I agree completely with the emotional intelligence and observation of relationships which I thought was absolutely astonishing. A tour de force... A remarkable novel.

It's an intriguing book, and the admiration heaped upon it is fully justified; the writing is beautiful, the story engrossing... What Belongs to You is a very accomplished novel from an exceptionally skilled writer. It brilliantly deconstructs the expat experience, modern sexual mores, and cross-continental cultural divides.

A wonderful book; I was very moved by it.

I was blown away by it... It wears its formal experimentation lightly...The subject matter is beautiful and [Greenwell] is very good at capturing the microclimate of people's emotions as it passes across their faces... A sympathetic account of a lifestyle that's become marginalised.

The pleasure comes [throughout the novel] from the elaborate shapes of Greenwell’s sentences…. Breathtaking.

Original...and power[ful]…. Brilliantly self-aware….. Greenwell’s novel impresses for many reasons, not least of which is how perfectly it fulfills its intentions. But it gains a different power from its uneasy atmosphere of psychic instability, of confession and penitence, of difficult forces acknowledged but barely mastered and beyond the conscious control of even this gifted novelist.

Searching for anonymous sex in Bulgaria, a young American strikes up a fraught friendship with a rakish drifter. In these poetic sentences, emotional fearlessness is mated with extraordinary sensitivity to the tremors of regret.

Garth Greenwell’s enigmatic debut, What Belongs to You, is an acquired taste but that hasn’t stopped me trying to foist it on all my friends. It’s the spellbinding account of an American academic’s intense desire for a rent boy in post-Soviet Bulgaria. Written in limpid prose, it reflects on the anguish of growing up gay with a Republican father in Kentucky. With things as they now are in the US, it couldn’t feel more essential.

Equal parts sexy and painful (and more often than not blurring the lines between the two), the book dives deep into matters of cultural differences, shame, illness, and human relationships.

A meticulous stylist... Greenwell's lines tease and tear at the soul.

With What Belongs to You, American literature is richer by one masterpiece.

What Belongs to You is a searching and compassionate meditation on the slipperiness of desire, the impossibility of salvation, and the forces of shame, guilt, and yearning that often accompany love, rendered in language as beautiful and vivid as poetry.

There’s a particular joy in reading Garth Greenwell, in having that feeling, precious and rare: here is the real thing.

A slender and achingly beautiful novel full of the gloriously messy pain of unrequited and inappropriate love.

Greenwell's novel is a brave and articulate psychological exploration of lust and desire.

This is a project of rare discernment and beauty, and it is not to be missed.

What Belongs to You is a rich and sensually detailed exploration of love and obsession. A haunting, beautiful novel.

What Belongs to You expands not simply the world of letters, but also our collective knowledge of what it means to be human.

Garth Greenwell’s What Belongs to You is a lyrical contemplation of desire, love and identity, a chronicle of the relationship between the protagonist, a gay American teacher, and a Bulgarian hustler. Written in meditative, generous prose, it is at once formally accomplished and intimate, high-minded but personal, witty but substantive. It’s the best first novel I’ve read in a generation.

Garth Greenwell is a unique, and uniquely welcome, voice in American letters.

What Belongs to You speaks of desire and the lives of those who desire with exquisite specificity and power, and will haunt you long after you turn the final page.

For its mastery of tone and its expert drawing together of a number of disparate elements, Greenwell’s narrative feat is utterly remarkable and the final ten pages amount to one of the most moving passages this reviewer has ever read in contemporary fiction.

Garth Greenwell's What Belongs to You appeared in early 2016, and is a short first novel by a young writer; still, it was not easily surpassed by anything that appeared later in the year... It is not just first novelists who will be envious of Greenwell's achievement.

James Wood
The New Yorker
ISO the Next Great Gay Novel: On Garth Greenwell’s ‘What Belongs to You’


The most exacting and visionary reading in contemporary literature of what it means to be gay in America today.

The Millions
Full Review
‘What Belongs to You’ review: An eloquent tale of desire and remorse


Although this is a debut novel, expectations have been running high [and] that promise is fully realized here in the dark magic of these pages.


What Belongs To You comes to feel, in the end, like a great enactment of an infatuation, exciting and appalling by turns—a brilliantly observed account of an attempt to make another person entirely yours, to subsume them within your story.

Garth Greenwell’s book has the power and infinite beauty of an ancient tragedy: on every page, passion, obsession, and the struggle for freedom collide with the inevitability of fate and the violence of society. At the same time, it’s a radically contemporary novel, which overwhelmed me as much with its language—rhythmic, incantatory, visceral—as with the way it takes the subjects of memory, escape, desire, and melancholy, and makes them new. What Belongs to You is an essential book.

Beneath the Pain of Exclusion


Garth Greenwell’s writing is alive to the foreign and the unknown; he opens our eyes to worlds we had not realized existed alongside our own.

There’s suppleness and mastery in [Greenwell's] voice. He seems to have an inborn ability to cast a spell.


Garth Greenwell's first novel is gilded with the kind of praise that debut writers might never dare to imagine for themselves. The quotes sprinkle the book cover like a coat of glitter, marking it out for greatness.

[An] extraordinary new talent... A huge amount of fans, I'm quite sure, for this fantastic book.

A truly stunning debut... a masterpiece... A literary star is born

What Belongs to You is Garth Greenwell's first novel, but it arrives in this country decked out with praise from his native America... When that volume of applause carries across the Atlantic it tends to herald a self-consciously ambitious doorstopper of a book, but What Belongs to You is a refreshingly slim, subdued and contemplative piece of work... Greenwell writes in long, consummately nuanced sentences, strung with insights and soaked in melancholy... What Belongs to You is an uncommonly sensitive, intelligent and poignant novel.

Garth Greenwell: ‘Cruising parks need to be written about with much more richness and nuance’


I had thought of Hollinghurst as I read What Belongs to You, Greenwell’s astonishingly assured debut novel, but questioned whether the parallel came to mind because both writers create vivid, enclosed worlds filled with ambiguous and shifting relationships between gay men. In fact, though, the greater similarity lies in their ability to blend a lyrical prose – the prose of longing, missed connections, grasped pleasures – with an almost uncanny depth of observation.

Alex Clark
The Guardian
Garth Greenwell, What Belongs To You: 'Challenging vision of gay life in an unequal world', book review

I was blown away by [What Belongs to You]

I read this book when it first emerged and I will keep reading it every year of my life. It is a secular desire bible. It is desire alive.


A powerful exploration of loneliness and longing, made exquisite by Greenwell’s poetic language.

I'm inclined to name books that I read during my adolescence or young adulthood, but I read this novel in my mid-30s and found it all the more life-changing. It is ambitious in every part of its being, from the line level to the larger narrative structure, and it depicts the intersection of desire and self-reflection in a way that feels entirely new yet deeply relatable. Garth is one of the great writers of our time.

Rakesh Satyal
Author of No One Can Pronounce My Name

What Belongs to You is an unsparing book which tells a story, I'd like to think, that Virginia Woolf would have liked. [...H]e has written, meticulously, the least comforting love story of recent years. For this he deserves our gratitude. 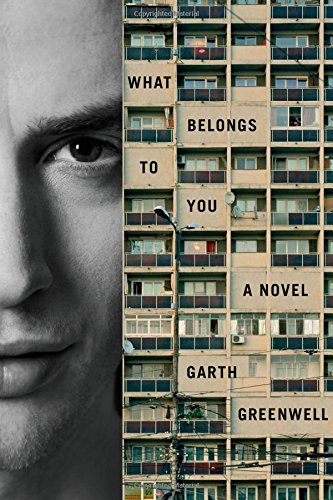