Starring Julia Louis-Dreyfrus as Vice President Selina Meyer, Veep follows Selina and her staff as they struggle to navigate through Washington politics, preparing Selina to run for president. However, as usual for Selina, things do not go according to plan.

The third series of Veep aired in the U.S. in early 2014 and premiered in the UK in July 2014. It has received nine Emmy nominations, including outstanding writing for a comedy series, and has been hailed by U.S. critics as 'HBO's most robust, and certainly most entertaining, comedy hour in years.'

Media
Reviews
Veep is probably the funniest thing on television at the moment – on either side of the ocean. Will Dean
Independent
If there were any doubt about which is television’s best grown-up comedy, this season, the third, for “Veep,” has put it to rest. Neil Genzlinger
The New York Times
HBO's most robust and certainly most entertaining comedy hour in years. Matt Roush
TV Guide
Veep is having one hell of a third season Kate Kulzick
The Onion A.V. Club
It's rapid-fire smart with some of the best gags you'll hear on TV at the moment. Sam Wollaston
The Guardian
Iannucci conquers America with a very British farce Tom Sutcliffe
Independent 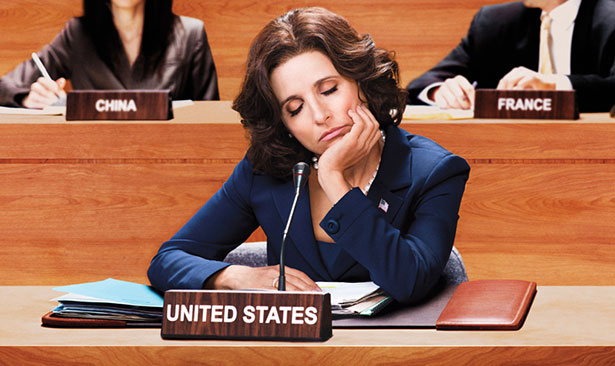