Two people fall in love in a world where the past is a dangerous country, not to be talked about or visited. As they discover where they came from and where they are going, a bigger, more shattering truth is revealed to them.

Kevern doesn't know why his father made him put two finger across his lips whenever he began a word with a J. It wasn't then, and isn't now, the time or place for asking questions. Ailinn, too, has grown up in the dark about who she was and where she came from. On their first date Kevern kisses the bruises under her eyes. He doesn't ask who did it. Brutality has grown commonplace. They aren't sure whether they have fallen in love of their own accord or whether they've been pushed into each other's arms. But who would have pushed them, and why?

Hanging over all the lives of everyone in this novel is a momentous catastrophe - a past event shrouded in suspicion, denial and apology, now referred to as WHAT HAPPENED, IF IT HAPPENED.

Tender and terrifying, J deserves to be spoken in the same breath as Orwell's 1984 and Huxley's Brave New World.

Listen to Howard Jacobson in a special podcast from Vintage Books here.
Rights

Chinese Complex
Taiwan
Rye Field Publishing Co.
Chinese Simple
Mainland China
Horizon Media
Dutch
World
Prometheus/Bert Bakker
French
World
Editions Calmann-Levy
German
World
DVA
Greek
World
Psichogios Publ Co Greece
Hungarian
World
Gondolat Kiado
Italian
World
Bompiani
Portuguese
Brazil
Bertrand Editora
Portuguese
Portugal
Bertrand Editora
Romanian
World
Editura RAO
Russian
World
Knizhniki
Spanish
World
Editorial Sexto Piso
Media
Reviews
J confounds one’s expectations but confirms Jacobson’s reputation. Ian Sansom
New Statesman
Jacobson has written a subtle, topical, thought-provoking and painfully uncomfortable novel. John Sutherland
The Times
A vaulting departure from Jacobson’s usual contemporary comedies, it is an eerie, melancholy satire set in a distant Orwellian future Nicholas Barber
The Sunday Express
A writer working at the peak of his powers. Max Liu
The Independent
J is a firework display of verbal invention, as entertaining as it is unsettling. Kate Saunders
The Jewish Chroncile
J is a snarling, effervescent and ambitious philosophical work of fiction that poses unsettling questions about our sense of history, and our self-satisfied orthodoxies James Kidd
The Independent
...comparisons do not do full justice to Jacobson's achievement in what may well come to be seen as the dystopian British novel of its times. John Burnside
The Guardian Full Review
Jacobson has crafted an immersive, complex experience. Anthony Cummins
The Guardian
Jacobson has produced [a novel] that feels frighteningly new. Tim Martin
The Telegraph
If he really is the English Roth, we may be about to witness a Roth-like culmination - an exercise in late great style. Ian Sansom
The New Statesman
Very little about Jacobson’s [novel] is straightforward — other than its originality and its devastating brilliance. Stephanie Cross
The Daily Mail
Howard Jacobson's exceptional and unsettling new novel... is dark and disturbing and unlike anything [he] has written before. Jonathan Freedland
The Jewish Chronicle

“Jacobson’s earlier novels have been compared with some frequency to Philip Roth’s. . . . It’s harder to see Roth in the thrilling and enigmatic refractions of J, whose subtle profundities and warm intelligence are Jacobson’s own. . . . J is not a joyful book, by any means, but its insistent vitality offers something more than horror: a vision of the world in which even the unsayable can, almost, be explained.” 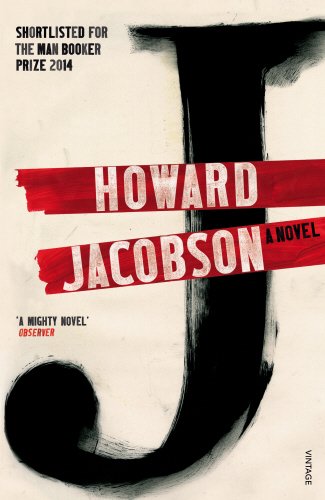