UK → Vintage
US → Bloomsbury Publishing
Frank Ritz is a television critic. His partner, Melissa Paul, is the author of pornographic novels for liberated women. He watches crap all day; she writes crap all day. It's a life. Or it was a life.
Now they're fighting, locked in oral combat. He won't shut up, and she's putting her finger down her throat again. So there's only one thing to do: Frank has to go.

But go where? And do what? Frank Ritz has been in heat more or less continuously since he could speak his own name. Let him out of the house and his first instinct is to go looking for sex. Deviant sex, treacherous sex, even conventional sex, so long as it's immoderate-he's never been choosy.
But what happens when sex is all you know and yet no longer what you want?

Media
Reviews
Quintessential Jacobson: a very funny, very intelligent novel, with lashings of sex, mostly unsatisfactory, and an undertow of seriousness. David Robson
The Telegraph Full Review
A savage and scabrously entertaining sex comedy, the likes of which I have not encountered since Philip Roth’s masterly Sabbath’s Theater. The Sunday Times

Brilliant and funny… No More Mr Nice Guy shows invention on every page, every paragraph. Jacobson is unique. Evening Standard

Howard Jacobson is one of the funniest writers around…It’s hard to imagine a more entertaining book. The Observer

A very funny, very intelligent novel…How many of Jacobson’s contemporaries have described the male condition with such wry, unsparing honesty? The Sunday Telegraph 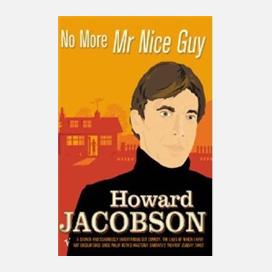