Marvin Kreitman, the luggage baron of South London, lives for sex. Or at least he lives for women. At present, he loves four women - his mother, his wife Hazel, and his two daughters - and is in love with five more.

Charlie Merriweather, on the other hand, nice Charlie, loves just the one woman, also called Charlie, the wife with whom he has been writing children's books and having nice sex for twenty years.

Once a week, the two friends meet for a Chinese lunch, contriving never quite to have the conversation they would like to have - about fidelity and womanising, and which makes you happier.

Until today. It is Charlie who takes the dangerous step of asking for a piece of Marvin's disordered life, but what follows embroils them all, the wives no less that the husbands. And none of them will ever be the same again.

Kate Cooper manages the translation rights for Who's Sorry Now?

Media
Reviews
Comedy, when it does come - and it comes brilliantly - is far likelier to exist at the level of outraged howls at the modern world... Jacobson is among the most exhilaratingly intelligent of contemporary novelists. Alex Clark
The Guardian Full Review
A bitterly funny meditation on the slippery nature of masculine happiness. Trevor Lewis
The Sunday Times Full Review
A rich, unrepentantly funny novel, full of vim and vigour and bolshie cleverness. Its prose pulsates with fresh images. Hephzibah Anderson
The Observer Full Review
There is no funnier or cleverer British novelist than Howard Jacobson. Sally Cousins
The Telegraph Full Review
Supple, funny and unsparing prose. James Walton
The Telegraph Full Review
The cleverest, funniest, sharpest writer we have. The phrase-making is delicious throughout... a tour de force which few other writers could have achieved. David Robson
The Telegraph Full Review 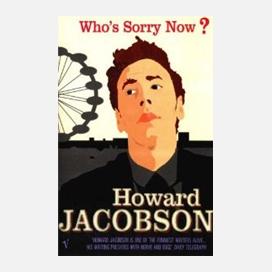