Ian MacKenzie's superb, sophisticated new novel offers a snapshot of the life of an expatriate, a “trailing spouse” on the brink of thirty, who has moved to São Paulo for her husband’s career in finance, with no job prospects of her own, a weak grasp of the language, and a deep ambivalence about having a child. The story takes place during the 2013 protests in Brazil, a time of deepening national displeasure, of crime and rumors of drought, in a country with one of the highest wealth disparities in the world. While Emma’s early days in São Paulo are dominated by inertia, her time spent parsing the Latin roots of words, reading, watching television, eating at expensive restaurants, half-heartedly tutoring wealthy Brazilians in English, she begins volunteering at a local church to assist Haitian and Syrian refugees and finds herself amidst the riots, unable to resist the tug of the country’s rising political and social unrest. Set against the backdrop of the global financial crisis, Feast Days is an astute and sharply observed depiction of the urban upper classes.

In its disarming intelligence and its hyperconsciousness, Feast Days recalls works such as Ben Lerner’s 10:04, Rachel Cusk’s Outline, and Jenny Offill’s Dept. of Speculation. It is the sort of short novel you want to read again as soon as you’ve finished, so clever is the dialogue and so dense its small bones.

This brilliant novel has no time for platitudes or conventional, ankle-deep morality; it plunges us straight to the depths. I’m not sure I know another book that feels at once so disaffected and so full of longing, so expansive in its sympathy and so terrifying in its candor. Devastating, funny and wise, it’s among the best novels I know about the fate of American innocence abroad.

The disaffected American narrator of this novel has followed her banker husband to São Paulo, Brazil. But the city and its people may be too much for her. MacKenzie makes clear what his protagonist might not always see: that her life stands in stark contrast to those of the impoverished locals.

The New York Times (Staff Pick from the Book Review)

Feast Days is a triumph of compression and range. Its scenes seemed to me small rooms of grand proportions and multiple doors – through each door a different world glimpsed, something light, something dark, something irreverent, something sublime, all of this often in one observation of a single moment which explodes into the reader's mind.

There is a sly, brooding intelligence at work in this novel, recalling for me the startling, highest times in American literature. MacKenzie is not just a great writer in the making -- he's already there.

Brilliant…. A pervasive sent of unrest, both large and small scale, social and personal, [is] conveyed in MacKenzie’s unruffled, discerning prose. With it, MacKenzie has captured one of the most memorable narrative voices in recent fiction

[A] poignant and perceptive novel

Intelligent and atmospheric, Feast Days deftly limns the inner life of a foreigner whose own trajectory becomes increasingly bound up with the tensions and complexities of the society in which she has landed.

Feast Days is a sophisticated and astute story of expatriate life told from a truly convincing, captivating female voice.

Feast Days is so much more than a novel. It's an all-consuming meditation on the modern condition, the search for rootedness in the ever-shifting worlds of our own creation, told by a writer so gifted with language that you forget who you are in the poetry of his prose.

Uzodinma Iweala, author of Speak No Evil and Beasts of No Nation

This highly anticipated new offering from Mackenzie poignantly contrasts the political breakdown of Brazil with the martial breakdown of a pair of expatriates. 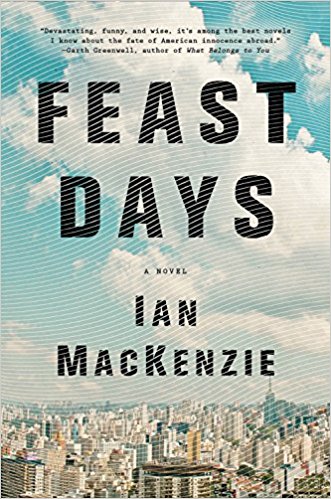