How Are You Going to Save Yourself

Featured on The Millions' Most Anticipated Books in August

Listed on Entertainment Weekly's 20 New Books to Read in August

First story in the collection published in The Paris Review

Listed in PopSugar's 30 of the Newest, Hottest Books to Pick Up This Summer

Featured in Esquire's Best Books of 2018

How Are You Going to Save Yourself centres around four young black men from Pawtucket, RI, Dub, Gio, Rolls, and Rye, through their teens and early twenties. Friends since childhood, despite differences in upbringing and worldview, they weave in and out of one another’s lives. We watch as two go to college while the two other stay behind. We see them grapple with the newfound power of sex and drugs, with the force of their needs and at times the violence of their desires. Throughout the collection, the four friends are each in their own way struggling to liberate themselves from the complexity of their family histories.

In this collection, Holmes brilliantly captures the volatile nature of his characters and how the world they move in can shift dramatically from one moment to the next. Touching on issues of sex, race, money and family, his stories have a potent immediacy to them, a propulsive energy that gets under your skin. They are at times funny, often uncomfortable, and always gripping. Holmes draws influence from masters like Ralph Ellison, Breece DJ Pancake and James Alan Mcpherson, and takes inspiration from the writing of contemporaries such as Danielle Evans, Terrance Hayes, and Mat Johnson.

Holmes has a deft touch with his writing; the enviable tender ability of capturing the ordinary, and the complex, and telling you as if you were two old friends sitting down for a catch up.

With potent immediacy and bracing candor, this provocative debut follows a decade in the lives of Dub, Rolls, Rye, and Gio as they each grapple with the complexity of their family histories, the newfound power of sex and drugs, and the ferocity of their desires.

[A] shockingly powerful debut collection from a writer whose talent seems almost limitless ... It's hard to overstate what an incredible writer Holmes is. How Are You Going to Save Yourself is a ... debut book that reads like the work of a writer with decades of experience.

J.M. Holmes' debut is a game-changing book on race and masculinity.

This is a sometimes brutal but also fabulous and necessary debut.

Spare in style, strikingly urgent, his is a voice to get excited about.

Holmes’s skilled voice and impressive ear for dialogue make this a refreshing read.

This wholly original book is a gripping examination of what it is to be a man in America.

Holmes proves his ability to navigate vulnerability, as well as his fearlessness in tackling tense situations head-on, all of which combines for a collection of superb stories ... A cracking debut.

Holmes’ writing is fresh, and his dialogue rings true. He doesn’t shy away from difficult subject matter or from showing his characters’ flaws, which makes for some incredibly tough scenes to read, but also highlights the everyday travails of black men in America. Readers looking for timely, nuanced fiction about race and masculinity should definitely pick this up.

As up-to-the-minute as a Kendrick Lamar track and as ruefully steeped in eternal truths as a Gogol tale, these stories of young working-class black men coming into their dubious inheritances mark the debut of an assured young talent in American storytelling. This collection makes you thirst for whatever's coming next.

It is a rare gift to us all when a writer’s talents and subject command equal attention, but that is just what we have here in JM Holmes’s superb debut, How Are You Going to Save Yourself ... These powerful stories herald the rise of an important and timely new voice among us, and I will now look for anything by J.M. Holmes.

Holmes’ searing study in masculinity is offset by irresistible heart and biting humor.

...a powerful rendering of contemporary masculinity in America, as accessible as it is complex in its depiction of the interesting nature of race and class...tragic and, at times, darkly comic, How are You Going to Save Yourself is a deeply human response to the existential angst of black men in America.

JM Holmes writes like someone told him Denis Johnson and Mat Johnson were brothers. These stories are as ferocious and fearless as those of his heroes.

JM Holmes is not just a new voice but a new force: honest, urgent, compelling, often hilarious, and more often gut-wrenching. In How Are You Going to Save Yourself, he writes with remarkable compassion and intelligence about characters whose own compassion and intelligence sometimes betray them. Comparisons to Junot Díaz and Denis Johnson are perhaps inevitable, but I imagine they’ll prove short-lived; in a few years we’ll be comparing writers to JM Holmes.

Buckle up! JM Holmes’s debut grabs you with the first sentence and doesn’t let go till it drops you gasping after the last period. This collection offers a tough and heartbreaking vision of masculinity, as powerful as it is uncomfortable. But boy is it worth the ride.

It is a rare gift to us all when a writer’s talents and subject command equal attention, but that is just what we have here in J.M. Holmes’s superb debut, How Are You Going to Save Yourself? 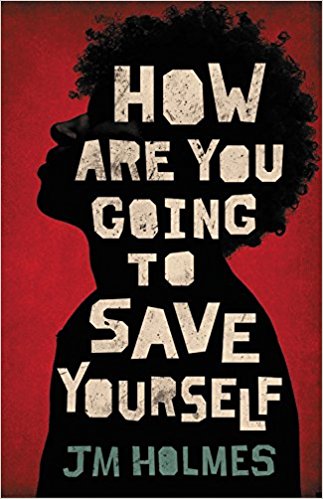