Amid the worst drought to ravage Australia in a century, a farmer turns his gun on his family and then himself. The rural community of Kiewarra is facing desperate choices daily. If one of their number broke under the strain, well, there but for the grace of God…

But as questions mount and suspicion casts a long shadow over the parched town, specialist investigator Aaron Falk is forced to confront the community that rejected him twenty years earlier. Because Falk and childhood friend Luke Hadler shared a secret, one which Luke’s death threatens to unearth. And as Falk probes deeper into the killings, old wounds start bleeding into fresh ones.

The Dry is a story of desperation, resolution and small-town prejudice, played out against the blistering extremes of life on the land.

Winner of the Barry Award for Best First Novel of 2017

Winner of the Prix Cognac 2017

Winner of the Indie Book Award for Debut Fiction 2017

Winner of the Davitt Award for Best Adult Novel 2017

Winner of the Ned Kelly Award for Best First Novel 2017

Winner of the AudioFile EarPhones Award

Longlisted for the Davitt Awards for Best Adult Crime Novel 2017

Shortlisted for the Matt Richell Award for New Writers 2017

Liz Dennis manages the translation rights for The Dry

A book that has atmosphere to spare, as well as a pleasing number of twists and turns. Elegant and gripping

It feels like an Ur-Australian novel, a whodunit that evokes the punishing landscape and searing aridity so convincingly, you expect a heat haze to shimmer above the page.

I loved The Dry by Jane Harper, I thought it was magnificent, like everybody else did... Fabulous!


It’s a clever, likeable crime story in which the town’s secrets are slowly unravelled and the drought ridden Australian bush becomes a character in its own right.

The Dry is a well-crafted debut and Jane Harper, while delivering the necessary twists and turns
that make a good crime novel, also captures the tension created by the climatic and economic
conditions of the area.

The Dry has the structure and momentum of a classic western, a searingly authentic sense of place and an elegiac feel for youth's passing... This is a first-rate piece of work.

The Dry is one of the most talked-about debuts of the new year... Harper's story is tightly plotted and moves briskly, the tension as brittle and incendiary as the dried-out crops on the Kiewarra farms.

My crime novel of the year... The savage beauty of the landscape makes an unforgettable setting.

Harper depicts it so well that the book would have reduced me to a sweaty, crumpled heap on the floor had I not been energised by her diabolically clever plotting.

Jake Kerridge
The Telegraph, the Best Thrillers and Crime Fiction of 2017

A cracking small-town thriller wound tight by desperation in a deadly Australian drought.

A best crime book of 2017: Harper suggested a potential torrent of talent with The Dry... [she] slowly but thrillingly reveals where the truth lies.​​

My crime novel of the year is Jane Harper's The Dry... The savage beauty of the landscape makes an unforgettable setting.

Joan Smith
Sunday Times Crime Book of the Year 2017
'The Dry,’ a Page-Turner of a Mystery Set in a Parched Australia


Jane Harper's fleet novel about a triple killing is packed with sneaky moves and teasing possibilities that keep the reader guessing... It's hard to believe this is her first novel... The Dry is a breathless page-turner

Solid storytelling that, despite a plethora of flashbacks, never loses momentum, strong characterisation and sense of place so vivid that you can almost feel the blistering heat add up to a remarkably assured debut.

Crime Book of the Month January 2017


It is hard to believe that this accomplished piece of writing, which returns again and again to the savage beauty of the landscape, is Harper's first novel.

Thriller of the Week


Wonderfully atmospheric, The Dry is both a riveting murder mystery and a beautifully wrought picture of rural community under extreme pressure

An Amazon Best Book of January 2017


The writing is fantastic, and the plot—where many mystery/thrillers fall short these days—was completely unpredictable in the best ways possible... Aaron Falk returns to his hometown in Australia to mourn, and inevitably investigate, his best friend's apparent suicide. What comes next is a series of twists and turns that will keep you guessing all the way until the end. I repeatedly found myself shocked and pulled in by Harper's fast paced and engrossing writing. Truly a fantastic read and hopefully the first of many to come from Ms. Harper

Pulse-thumping suspense... Building from the first page, rammed with atmosphere, suspicions, lies and tension, this is a first-class crime debut.

Set in a small Australian town during a blistering drought, this creepy and tightly woven tale about a detective investigating a brutal triple-murder is getting huge global attention for all the right reasons—it's brilliant!

Settle in a comfy chair and read... The Dry by Jane Harper. This gripping novel charts a policeman's unwilling participation in the investigation of a terrible murder in the town of his youth, and is set to be the biggest crime release of 2017.

So accomplished, I couldn't believe it was a debut. The pace is whiplike and the writing is heaven. 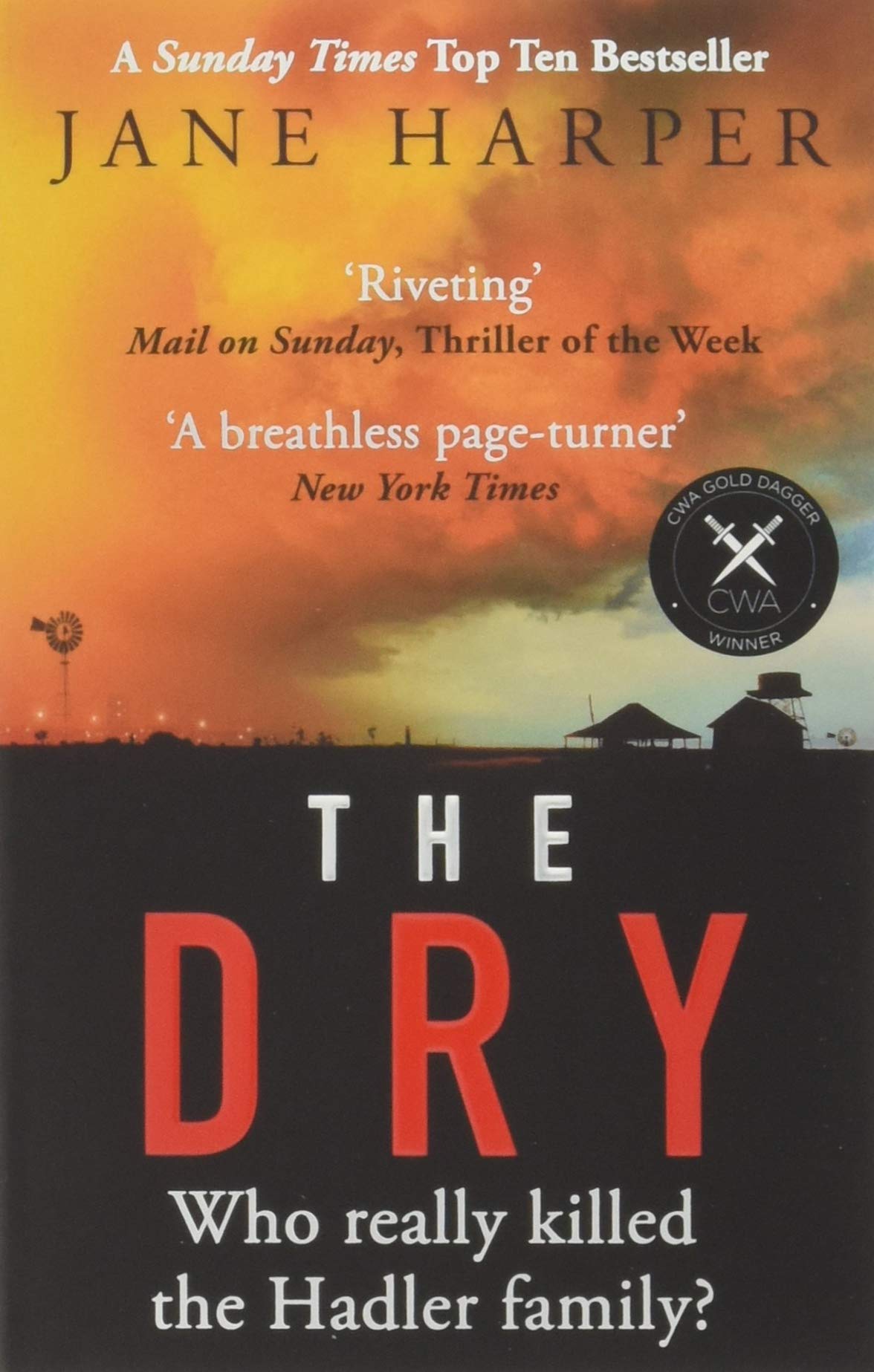