Carte Blanche is set in a post-9/11 world. Whitehall is bound by red tape, smeared by sexed-up dossiers, invasions of privacy, political snooping and rumours of illegal target killings. In this new world of government transparency, Bond is recruited to the Special Operations Executive, an agency that operates independently of Mi5, Mi6 and the MoD. Its very existence is a secret; its aim to protect the Realm by any means necessary. Bond’s ‘carte blanche’ is under threat from the enemy of bureaucracy, even as he is driven through a thrilling sequence of action and danger in defence of his country.

Taking place over five days, the action unfolds following an alert from GCHQ about a major attack due later in the week. Bond finds himself enlisted to work on the mysterious ‘Incident 20’ and his quest to uncover the villains behind the plot takes him on a rollercoaster journey across Eastern Europe, the sands of Dubai and Capetown.

Bond fans can expect to see familiar faces working alongside Bond such as M, Mary Goodnight and Moneypenny. Here too are some of his former associates (although not as you’ve seen them before), including the sublimely beautiful Mi6 intelligence analyst Ophelia 'Philly' Maidstone. Also central to the story is arch villain Severan Hydt – owner of Green Way International Disposal and Recycling, a man obsessed with decaying buildings and rotting flesh.

Fans of Jeffery Deaver can look forward to the author’s trademark twists and turns, attention to detail and technological know-how with the introduction of new cutting edge gadgets.

The audio rights are handled by Deborah Schneider.

The Herald-Sun
Welcome back, Mr Bond. We're shaken AND stirred.
IBN Live
Talk about a match made in literary heaven: a James Bond novel written by Jeffery Deaver, the author of a string of bestselling thrillers...The story’s a corker.
The Chronicle Herald
A magnificently manic, impeccably researched and at times gory plot, with Deaver’s trademark misdirection and twists flying.
Washington Post
Deaver’s Bond has all the moves necessary to keep a 21st-century thriller clipping right along
The Globe and Mail
A terrifically exciting reincarnation of Fleming's hero.
Denver Post
The highly anticipated new James Bond caper.
The Washington Post
A well-crafted, page-turning homage by a confident and accomplished hand.
Country Life
Deaver has upheld the Fleming legacy with honour, but in his own inimitable style.
The Australian
A terrifically exciting reincarnation of Fleming’s hero.
Miami Herald
Deaver's plotting is supernaturally skilled: he weaves fiendishly clever stories that constantly twist and turn, taking the reader down blind alleys, doubling back on themselves, throwing in red herrings that aren't necessarily red herrings, creating a tremendously enjoyable maelstrom of confusion and second-guessing. Most importantly -- and impressively -- the twists never feel gratuitous.
Irish Independent
Deaver delivers more twists than a 1960s prom dance and the plot pounds along at a breathless pace.
Slate Magazine
Deaver’s enthusiasm for Bond comes through on every page and he puts the gift for plotting that has garnered him such massive popularity to superb use here. So Carte Blanche is excellent fun, a great read and Jeffrey Deaver has breathed new life into an old favourite.

The Express
Fleming fans are sure to be pleased with the results.
Star Telegram
Deaver does it with a flair, with some panache, with a wry British humor. And it's the package that has made Bond a creation that will endure for a long, long time.
NPR
Jeffery Deaver truly got it.
AnnArbor.com
When it comes to creating an interesting plot Deaver is a master of suspense.
The Huffington Post
It is hard to imagine any book hitting the stand this year that tops this one.
Washington Independent Review of Books
Top US thriller writer Jeffery Deaver and iconic spy James Bond prove to be an irresistible combination. Hailed as “the master of ticking-bomb suspense”, Deaver brings Ian Fleming’s creation bang up to date in this post 9/11 tale.
The Daily Express
Deaver has promised to push the world's most famous fictional spy to "new extremes"..."Are there lines that even James Bond should not cross?" Deaver said in a statement.


The Age
American thriller writer Jeffery Deaver, who was commissioned to write the latest installment of the blockbuster series...based "Carte Blanche" in Dubai because it was a melting pot of old and new cultures.

While details of the plot remain a closely-guarded secret, there were already informal talks with the Dubai royal family about making a film based on the book.

Brisbane Times
Deaver is a master of the twist in the tale and he deploys it here with cinematic verve, keeping the reader biting their nails until the last minute.
The Guardian
It's hard to imagine anyone not being impressed by this novel.
The Independent
So could he assume Fleming’s identity rather than write another Jeffery Deaver novel only with a hero called Bond?

The answers are emphatically “Yes”.
The Telegraph
Kingsley Amis, John Gardner and Sebastian Faulks are among those who have tried to bring Bond back to life. Deaver, though, is in a class of his own: nobody's done it better.
The Evening Standard

Fleming's niece Kate Grimond says: "He has a great understanding and appreciation of Fleming's original creation. We feel sure that he will produce an exciting page-turning 21st-century Bond mission -- and a Bond for the present day."
Carol Memmott
USA Today
Otto Penzler, proprietor of The Mysterious Bookshop in New York, says Deaver's writing style can only enhance the Bond franchise.
"The main thing he can bring is a greater sense of suspense to the books," Penzler says. "A lot of the books and movies are becoming basically chase plots, and Jeff really has the ability to create suspense better than almost any writer working today." 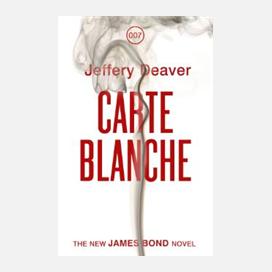